A SUP foiling and a longboard session for me yesterday. The harbor was the spot once again (this time not the only one, as other north shore spots started to become a bit smaller hence doable), here's George Foster in a picture by Chris Pagdilao, showing a very good centered stance. 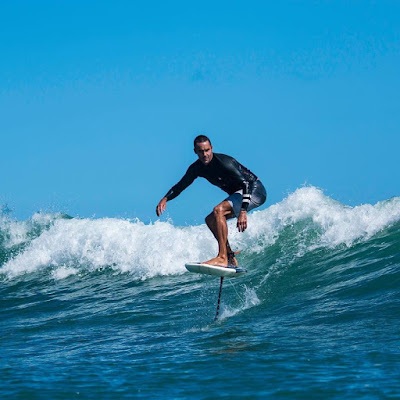 Having a paddle in your hands and not using it should be a crime imo. Alex Aguera is not going to jail any time soon, as he touches the water with it at each single cut back. 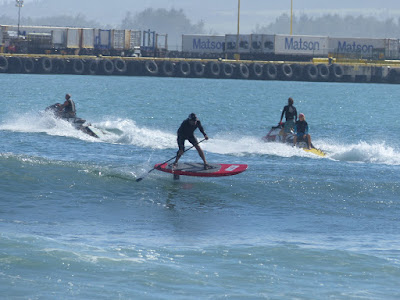 On the opposite side of things, Jeremy Riggs built a custom thing (which I named Riggs' rig) to get rid of his paddle (and film from the back) while he's flying. Love how everybody is different and there's no absolute truths. 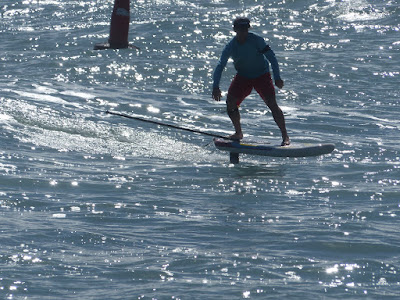 West wrap (from the mistery NW swell discussed below, I guess) should make for another day of small waves on the Kihei and Lahaina side. Reports from yesterday said mostly knee high, occasionally bigger.

4.5ft @ 11s from 15° (NNE)
4.1ft @ 13s from 345° (NNW)
One thing that puzzled me yesterday (there were many) is: what happened to the NW swell? Today we see it at the N and Pauwela buoys, while it's probably masked by the N to NE readings at the other ones. We can say that there's multiple swells in the water, from NW to NE. Still early for the upcoming E one, which should start increasing gradually throughout the day and peak tomorrow afternoon at 11ft 10s from 89, according to Surfline.
Unfortunately, the wind is blowing at my house as I type, while the Kahului sensor only shows 5mph at 5.54am. It'll probably go up and down with the frequent squalls. Exposed spots might be allright in the lulls, otherwise seek for shelter.
Wind model still not updated, this is the much lower resolution (not as good) image from the graphic rendering of the NAM model at noon by Windy.com. Not strong, but dead onshore. 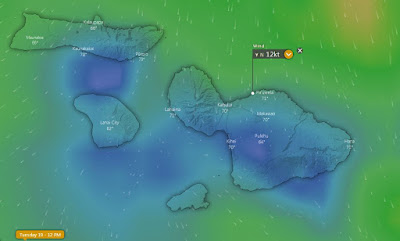 North Pacific has a E fetch. The NW one depicted in the map on the right is wide, but so weak that I didn't feel like circling it. 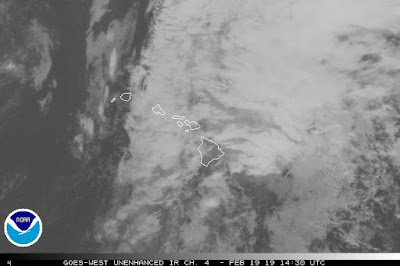 And the radar shows plenty rain.