A longboard and a windfoiling session for me yesterday. The wind was very light in the second one and I took out the biggest wing of my Gofoil quiver: the Maliko 280. 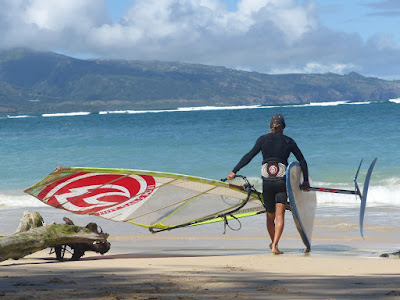 Being the biggest, it's the one with the most lift, but also the slowest (I describe the difference that the size of the foil makes in this post). It was consequently hard (lots of front foot pressure required) not to overfoil on the drop on the breaking waves, as they were chest to head high on the reef, but it was perfect for the very soft bump that continues to roll on the inside.

Here's a video clip filmed by a friend. Every little change of direction generates lift and is dictated by the contour of the bump, which you can't really see. It might not look like it a lot of fun, but it is, as I'm foiling mostly thanks to the energy in the water. As a matter of fact, you can see that I won't be able to foil right away after the tack on the inside. 8-10 knots is my guess on the wind, the sail is a 4.3. I don't have/want a bigger one, as it will feel heavy/draggy while foiling.

3.9ft @ 14s from 326° (NW)
2.6ft @ 11s from 25° (NNE)
1.5ft @ 12s from 346° (NNW)
The continuous WNW energy at the buoys is a consequence of the continuous presence of the WNW fetches we've observed in the past few days. Pauwela has the smallest numbers because it's the most sheltered of them. If you saw the final day of the Volcom Pipe Pro yesterday, you saw how much more size Oahu had, for example. Hookipa will have overhead waves nonetheless (also thanks to the short period ENE energy) and very favorable winds in the morning. Not sure I'll be able to report though.

South Pacific has a wide but fairly weak fetch. 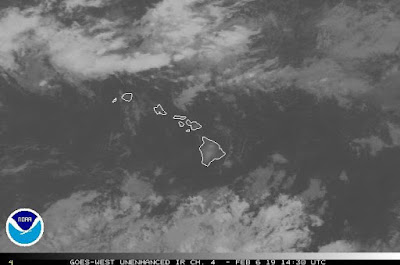