Two longboard sessions for me yesterday. I had literally 5 minutes to take photos and that's what I got. Enough to show that the waves in the harbor were fun once again. 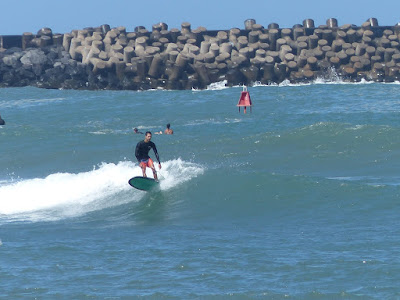 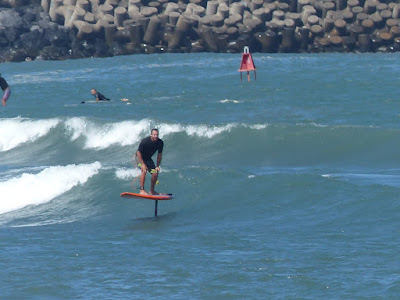 Once again, those readings at the buoys might keep the south facing shores from going completely flat, but barely. And once again, yesterday I completely forgot to mention the possibility of the NE swell to wrap down the west side coast. This is an image I captured from the Kaanapali Point webcam when the swell peaked at around 15ft 12s and it sure shows a pretty big wrap. How far did the wrap get, I have no idea. But I'm going to guess that there were small waves again in the Puamana area. Which means that there might be also today, although smaller since the NE swell is now down to 11.7ft 12s and about to go more east (less wrap). 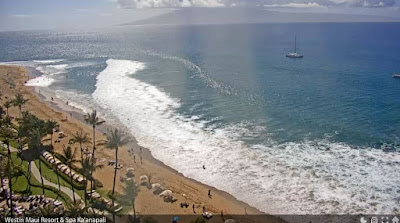 Complex but interesting readings today. Below is the collage of the graphs of NW101, N, Waimea and Pauwela. On it I put an arrow to indicate that the NE swell peaked at the N buoy around 4am. 4+11=15, so you would expect the swell to have peaked in Maui around 3pm, instead it looks more like 2pm. Close enough, I'd say. What counts is that the swell is still elevated at 5am locally (11.7ft 12s from 40), but it's not much more E (77 degrees) at the N buoy, so we can expect that shift to happen also in Maui during the day (it follows the evolution the fetch had, so no surprise there).

But I also circled the new rising remotely generated NW energy at NW101 and Waimea. The fact that those are the only two buoys that show it confirms my theory that sometimes, some buoys can be "overwhelmed" by the other primary swells and not register other secondary ones (or that the Surfline algorithm to extract the data does not pick it up). If the swell is 5.2ft 15s at Waimea, of course there will be some NW energy also at Hanalei, but it just doesn't show because 12.8ft 13s from 56 is greatly predominant. Here's Pat Caldwell's explanation of the fetch history. Don't forget that the timing if for Oahu (roughly 4 hours later for Maui at 16s).

A hurricane-force low pressure system in the far NW Pacific 2/12-13 tracked slowly NNE. It weakened as it entered the western Bering Sea 2/14-15.
A long-wide fetch set up over the 305-320 degree band with highest seas 2/13 to near 40 feet beyond 2400 nm from Hawaii. The source zone stayed mostly west of 165E. The long travel distance lowers local surf potential.
Long-period forerunners from 305-315 degrees are expected locally Saturday afternoon 2/16. The event should be filled in by Sunday 2/17 dawn from 305-320 degrees a notch under the winter average. It should slowly drop Sunday night into Tuesday from the same direction. Marginal gales from 2/15 out near 170E could keep small breakers from 305-315 degrees on Wednesday.

In summary: the Maui waters will still have elevated NE swell that will turn more east during the day and a rising NW swell that Surfline predicts to be around 4ft 16s in the middle of the day. Plenty energy and waves to play with, with the most exposed breaks still too big for the common mortals, so seek for sheltered places again. What also counts is that the wind is finally going to be light all day. Thanks to the trade winds disrupting presence of the local low just north of Hawaii, it should actually stay light for the next 10 days, as the Windguru table below shows, but that can change a lot if the low moves a little compared to the model's output. Whatever it will be, don't you like the complete absence of bright colors and of the dreadful "windguru rating stars"? It just look pleasant to me and I'm sure also to the eyes who also readers prefer clean waves to the practice of wind related sports. 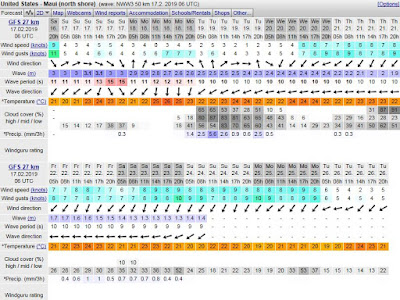 Wind model still didn't update, so this map is now more than three days old. Better than nothing.

North Pacific has a wide but really weak WNW fetch and a much closer E one.

Morning sky and the counterclock circulation around the center of the local low. 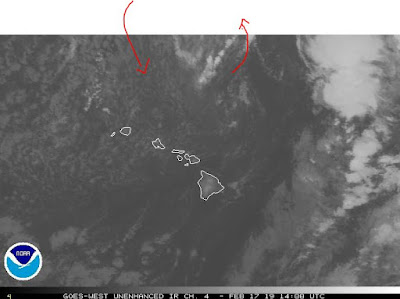