A SUP foiling session for me yesterday. Below is the incredible sunset we were blessed with after the big rain. Photo by Jimmie Hepp. 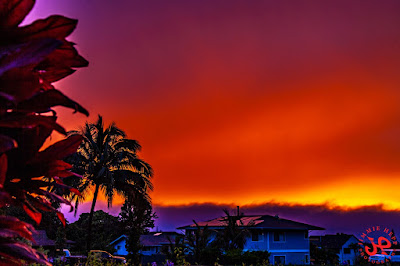 The Haleakala might easily have some snow also this morning, so I thought of sharing this wonderful video shot by my friend Walter Niederkofler in the Dolomites. Hope you enjoy even if it's not surfing.

Lanai has some westerly energy that Pat Caldwell suggests might be from this source:
WW3 suggests a pinch of swell coming from 240 degrees on 2/19. The source was tropical cyclonic activity near Vanuatu last week. The system formed into tropical cyclone Oma as it moved more into the shadow of SW Pacific islands 2/16-19. No surf beyond tiny to small is expected from 240 degrees this week.

As usual, I collaged the maps of Dec 15,16 and 17 to make it easier to spot the tiny fetch he's referring to. Wherever that comes from, it shouldn't make for waves more than knee high, but I don't have any fresh report from the south shores.

All about easterly energy for a few days. Almost 9ft 10s from 58 will give the east facing shores well overhead waves. Seen the direction (58, but predicted to turn more east) Hookipa will have waves too and I will most likely post an early report. Last time I did that was Feb 7th. That's how long it has been since Hookipa has been surfable by the most. Complete lack of wind all morning should make for excellent conditions. No idea of the water quality.

Wind model is back, this is the noon map.

North Pacific has a E fetch. Not much brewing from the NW, but it'll change later this week.

Morning sky. We're out of the clouds. 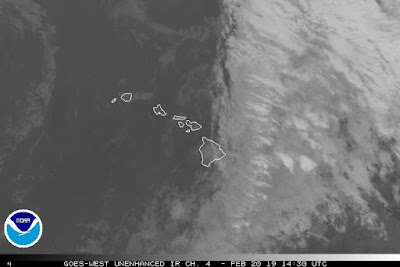