Oh wow, 10.4ft @ 13s from 345° (NNW)! And look at Waimea! That's some raw energy out there you guys. Forget about Hookipa, the trick will be to find a spot that gets partially hit by that.
Well, considering the wind will be light SW, that shouldn't be too difficult... just look at the Maui map!

Here's the wind map instead, where you can admire the beautiful spiral of winds around the low pressure that formed right north of the islands. I circled the part of it that is generating waves for us. Very close fetch, that's why the energy is so raw, the periods are mixed up and it's very consistent.
The more a swell can travel, the more the different periods separate from each other because of their different speed, the more the swell shakes away the chop.
So, close fetch not ideal at all, but MUCH better than no fetch!
Once again, look for a spot that doesn't take that direction straight on and you might get lucky.

With the MC @ 2km website not updated (what the hell, do they need a human to do that? can't they figure a way to make an automatic update???), the source for wind prediction will be the not as reliable two models reported at the bottom of the page by windguru, which show light SW all day.
That is a dream for the north shore surfers, but a nightmare for the west side surfers and all maui windsurfers/kitesurfers. 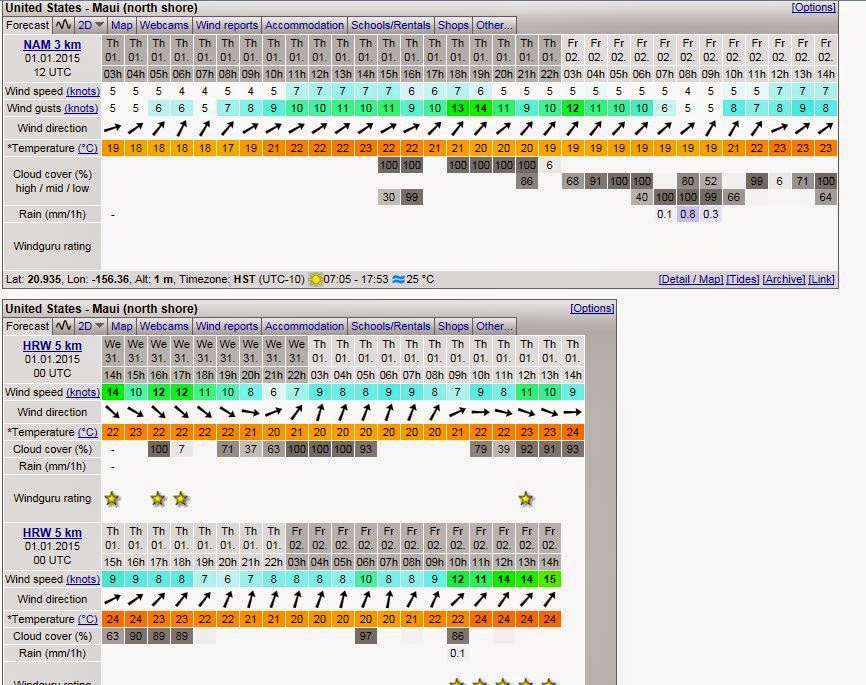 This is it for today, do not expect a photo from Hookipa, because I'm leaving home in the dark.

PS. I took the "distracting" Lanay buoy readings off. I'll put them back, whenever I think there's a south swell of some sort.
Posted by cammar at Thursday, January 01, 2015