As called, yesterday was a beautiful day of surfing. As called, it was very crowded all day.

I'm at the point where I have too many boards again and I had to try one more time a small one (I think it's around 28l) before deciding to let it go. So I did and here's my 2 hours session's numbers:
- 2 wipeouts on steep takeoffs
- 1 drop in (meaning, I dropped in a guy that I didn't see)
- 2 big sets on the head that made me do the whole paddling loop
- 10-15 times almost pushing up and then pulling back because there was someone deeper that caught the wave
- 0 waves ridden!

Pissed off? Nah... stoked to have no more doubts that I have to let go of that board. It's a sad reality, but I need at least 30-31 liters. And I need to surf less crowded spots when it's like yesterday.

Here's a couple of shots that illustrate how good and crowded the waves were. First one is from Jason Hall. 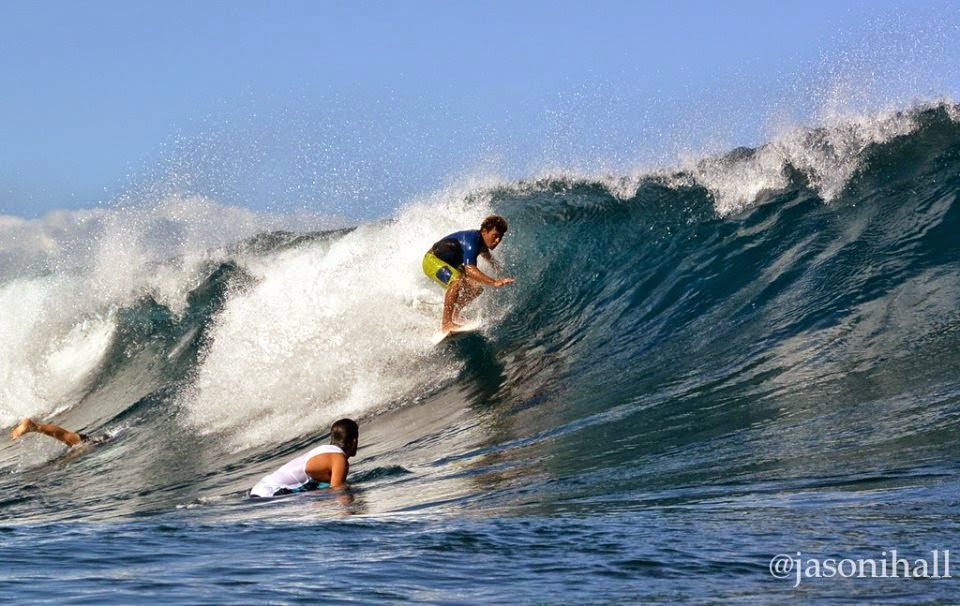 Second one is from Jimmie Hepp. 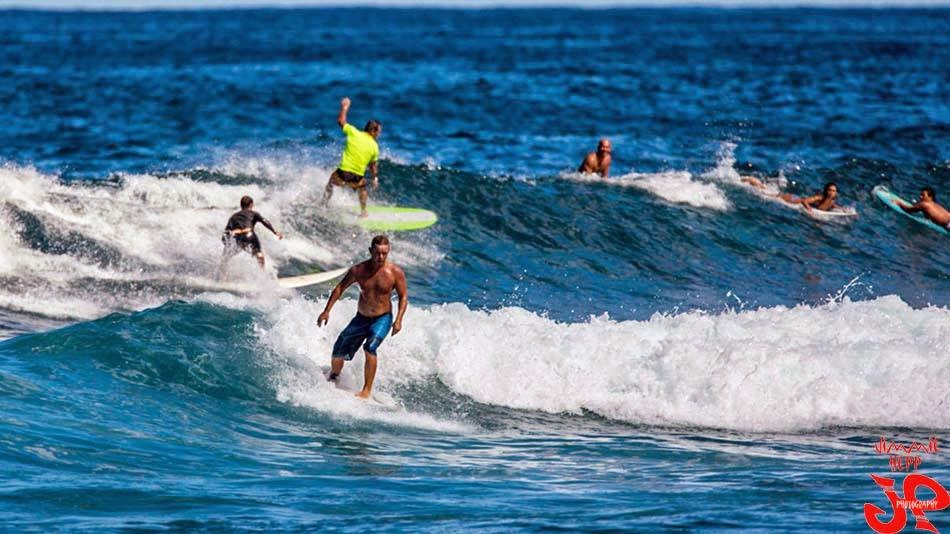 Here's the wind map version of it with a massively wide fetch of winds oriented towards Hawaii (that means waves). 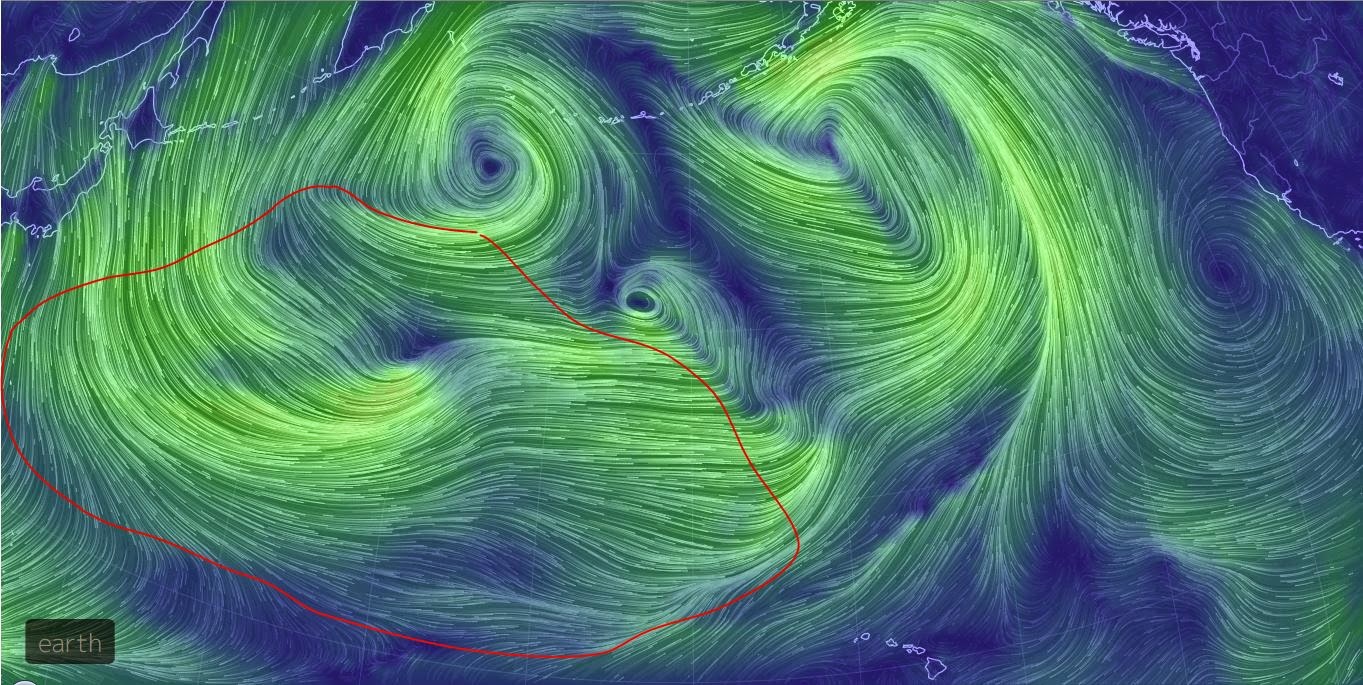 Well, that's for Oahu and those guys strongly believe that being safe is better than being sorry...
In Maui instead today it's going to be one of the smallest days of the winter... the whole day!
That's why you need a website like this....

Let's have a look at the buoys at 6am in fact:
NW

Below are the three graps together. Does it looks like a high surf advisory call to you?
Everything is going down except that 3.6f 12s swell at the NW buoy that I indicated with a red arrow. But the period of it went already down to 12s and that for sure is not the swell that will cause the high surf advisory.
The same swell is showing with periods of 14 and 15 at the Waimea and Pauwela buoys. Both of them will contribute to make sure that it's not going to be completely flat, but once again, I don't see any big swell at the buoys yet.

That would be of no surprise at all if you have a subscription to Surfline. Below in fact is the first 5 days of their 14 days waves forecast that has proved to be very reliable. I hope I won't get in trouble by occasionally publishing "non public" material but - what the hell - I'm recommending everyone to get a subscription, they should be happy about it!

The Hookipa forecast graph clearly shows the swell picking up very quickly during the night. The 8pm forecast for today is 3.4f 16s, so there should be sets before sunset. The 8am forecast for tomorrow is 10f 14s and that means big waves guaranteed. No Hookipa for me. 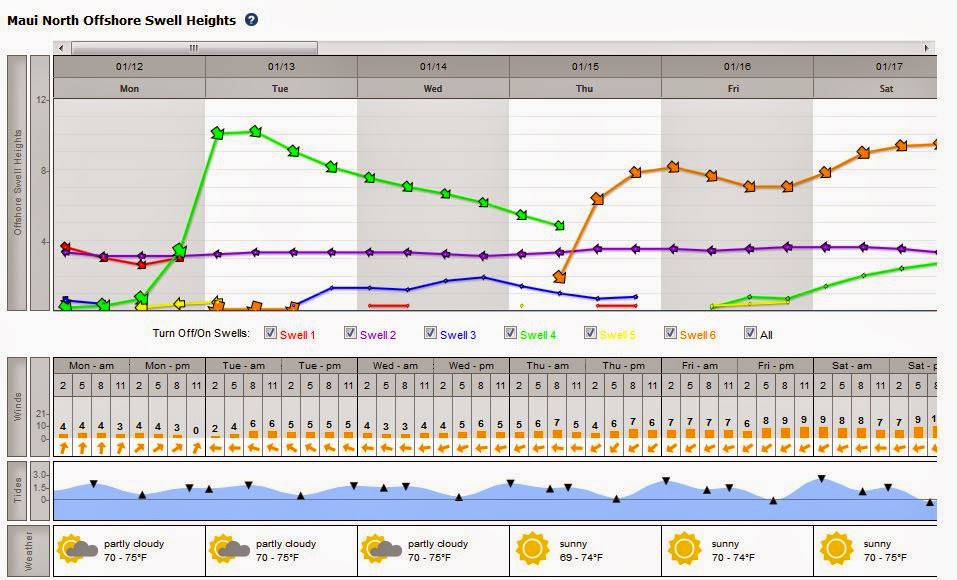 So most of the day today is going to be unusually small. I work at 2 today, that's why it's 7am and I'm still in bed! :)
Gonna go later with a longboard. No wind all day again, so have fun in the sun everyone!


PS. All the sources for this post are permanently linked in the links section on the right of this blog.
Posted by cammar at Monday, January 12, 2015