No photos from yesterday, here's a random shot from the island of Guersney.

Tasman Sea swell trickling down. Check the Lahaina or Kihei webcams if interested, for size, conditions and consistency.

New long period WNW swell on the rise. It went up to 7ft 17s at the NW buoys, but I'm afraid it's going to be max 5ft locally. The shorter period NNW one will be disappearing throughout the day instead.
Below are the maps of April 27 through 30 that shows the fetch that generated the long period swell (red arrow). It should provide waves until Wednesday.

Below are the graphs of NW001 and Pauwela together with the Surfline forecast.

Home guess for Hookipa is around head and a half. Could get up to double during the day. Not a good direction for Honolua, even though, thanks to the long period, some of the more northerly sets could make the wrap around Molokai and very inconsistently get there (very low confidence on that). Strong easterly trades. 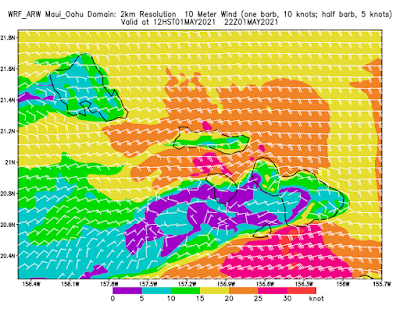