The funding campaign for the new Lahaina harbor webcam has raised $2025. The goal is reached and we should have the webcam online any time soon.

A day of rest for me yesterday. Jimmie Hepp went to Hookipa and shot the windsurfers jumping on the small ramps. I picked this one out of this gallery. 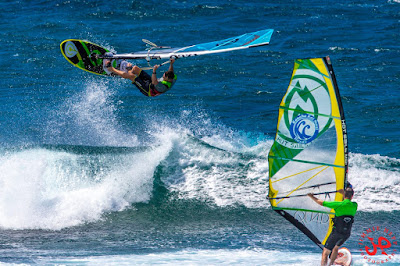 South swell finally showing at all the buoys, I'll report before 7am.

Confusing readings at the NW buoys (didn't even feel like reporting them), shall we trust Hanalei and conclude that there will be a small bump on the way for today?
Let's see what Pat Caldwell says:
The strength of the low pressure systems in the north Pacific became much weaker last week relative to the active pattern of late March into early April. These weak low pressure systems have been steered east by a zonal jet, which also reduces surf potential by limiting fetch duration. This is expected to give spring minimal conditions this week.

Below is the collage of the maps of April 20, 21 and 22. You can see how quickly that small low raced across the great circle rays towards the Gulf of Alaska. So maybe a small bump in the afternoon, but it'll still be mostly windswell, imo.

North Pacific only has the windswell fetch.

South Pacific has an intense but tiny and buried deep south of the Tasman Sea fetch. Overall another pretty poor day of wave generation for Hawaii. 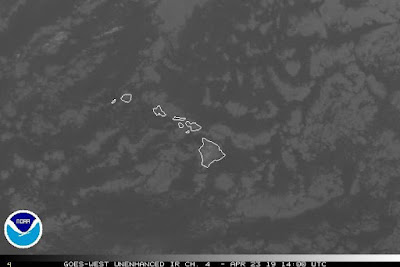