A longboard session for me yesterday. This is my pick of Jimmie Hepp's daily gallery of the windsurfing action at Hookipa. That wave is well above the average of the day. 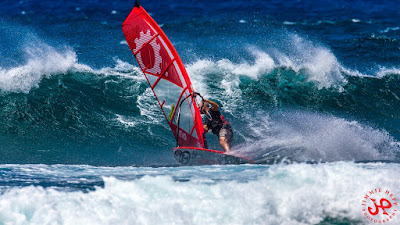 1.7ft @ 5s from 79° (ENE)
1.4ft @ 14s from 349° (NNW)
1.2ft @ 12s from 343° (NNW)
New NNW swell on the rise all day. Below is the collage of the graphs of the reported buoys plus the Surfline forecast. The red line indicates the peak at the NW buoy, which happened around 8pm. At 12s, it takes 20h to get here, so we can expect this swell to peak right at sunset, which is pretty much also what the Surfline forecast shows. Early morning will still be pretty small and the very low tide at 8.25am won't help, but it will still be bigger than yesterday, probably with head high sets. I might post a Hookipa beach report before 7am. Quite possibly, this is the last opportunity of the season to surf Honolua, but you never know.

South Pacific has a massive fetch oriented towards Central America, hopefully we'll get some angular spreading. 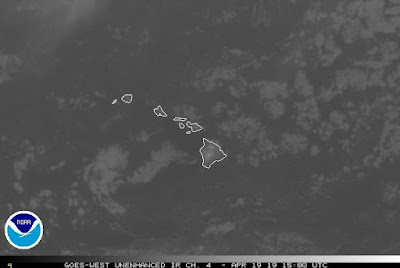