The funding campaign for the new Lahaina harbor webcam has raised $1640. Thanks a lot and let's keep them coming. I'm gonna start my posts with an update like this until it reaches its goal of $2,000. Please donate to the page, not to me. I have nothing to do with this campaign, other than the fact that I totally support the cause.

A longboard and a shortboard session for me yesterday. This is Dave Kalama foiling in the harbor in marginal conditions that could have been enjoyed pretty much only by SUP foilers (too small for prone foilers, let alone regular surfers). 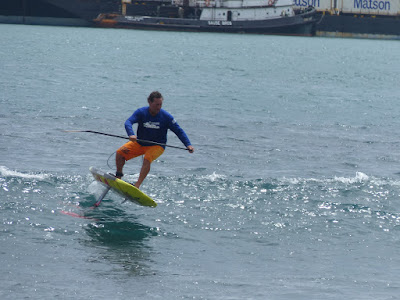 0.9ft @ 16s from 202° (SSW)
Older background energy keeps steady at Lanai with 1ft 13s while new 16s one fills in. I had a report of knee to waist high waves at Thousand Peaks yesterday. Today it should be at least the same, if not more.
The Surfline forecast calls for flat instead, and doesn't even report this energy, but it's obviously wrong. Below is the collage of the maps of April 9, 10 and 11 that shows the fetch responsible for the new energy (red arrow).

3.1ft @ 12s from 320° (NW)
3ft @ 5s from 82° (E)
Both the NW energy and the windswell are trending down and today (and even more tomorrow) should be a relatively small day on the north shore (Hookipa still probably head high this morning). Below is the graph of Pauwela together with the Surfline forecast. Look how in this case the two graphs are very similar instead. 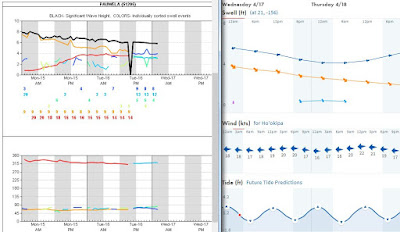 Wind map at noon. Should be fairly calm till 8ish.

North Pacific has a couple of weak NW fetches.

South Pacific still pretty active with multiple fetches both directly oriented towards us (red circles) and slightly to our east (blue circle, enough for angular spreading). The most intense one is one deepest south that is off the map on the right, but circled in red in the one on the left. Next week should be pretty good on the south shores. 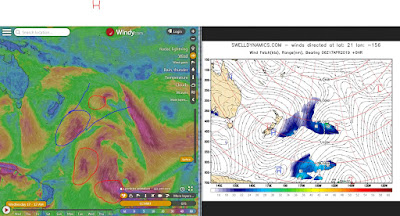 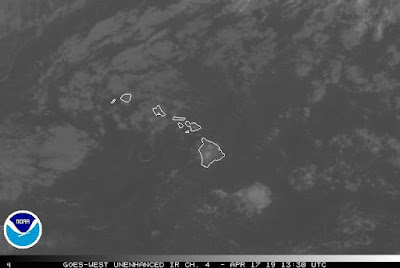 Is that a small fin on Dave's board, approximately under his front foot?