The funding campaign for the new Lahaina harbor webcam has raised $1640. Thanks a lot and let's keep them coming. I'm gonna start my posts with an update like this until it reaches its goal of $2,000. Please donate to the page, not to me. I have nothing to do with this campaign, other than the fact that I totally support the cause.

Uninspiring conditions led to a rest day for me yesterday. I picked this photo out of Jimmie Hepp's gallery of the day, as it still shows a wave of pretty solid size, but the windswell waves did go down a bit at Hookipa. 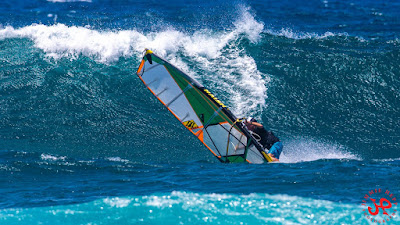 1ft 13s at the Lanai buoy should make for tiny background waves on the south shore again.

Windswell still holding up to decent numbers, but on the steady decline at Pauwela. Below is the collage of the graphs of the reported buoys together with the Surfline forecast. I circled the new long period NW swell that will slowly rise throughout the day. I also put an arrow on the graphical representation of this new swell on the forecast (orange line). That is 12pm and the value is 0.5ft 20s, which is what we have instead already at 3am. We can conclude that the Surfline forecast is a bit late (which is much more true than saying "the swell arrived early").

1ft 20s can easily make for head high waves at Hookipa, so the swell, although inconsistent, should be noticeable already at dawn. It would obviously be easier to notice if there were no other swells in the water. Instead, as pointed out, there's still plenty energy from the windswell, which will provide still most of the waves for the whole morning. I'm calling for overhead sets in the afternoon at Hookipa from this swell, with low but slowly increasing consistency. This swell might peak during the night, but tomorrow morning there will be some pretty good surfing conditions, thanks to one day of lighter winds.

Below is the collage of the fetch maps of April 11, 12 and 13. As you can see, the storm started in a pretty west position (just offshore Japan) and then it moved NE. Not the best track at all, and not a particularly big fetch, but the wind intensity was there, and that, combined with the distance, is the reason for the long period energy.

Below is the Windguru table for the next 10 days. Windguru doesn't do any forecast at all. They just put together in a brilliant way (always been a fan of that table) the output of various wind models. They also have a line for the wave forecast, which they take (like every other website) from the NOAA WW3. I don't have time to double check the WW3 output myself, but 7ft 18s at 11am is just ridiculously high. And that happens all the time. My suggestion is: don't look at the wave forecast on it. Do look at the long term wind forecast instead, which is why I also post it. After a relatively lighter day tomorrow, we're going to have many more days of easterly trades. East MUCH better than NE for the early morning surfing, so that could be worse. I like the straight east also for the Lahaina side better and there will be some action in the second part of the week over there too. 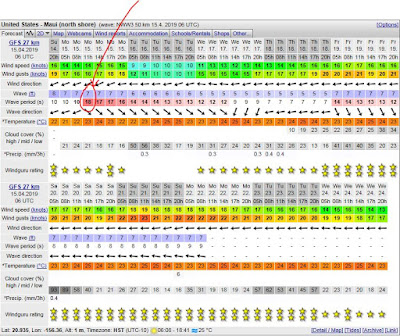 North Pacific has a NW fetch and the almost disappeared windswell one.

South Pacific offers a proper S fetch. The waves being generated in there will get here in about a week. 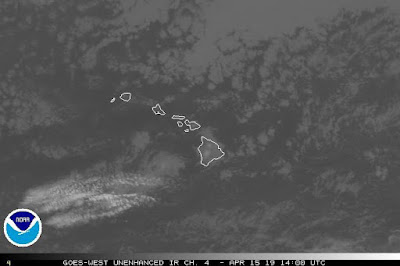