Yesterday I had the pleasure to meet contest director Ian Haywood and the honor to be nominated official forecaster of the upcoming annual contest on Thanksgiving day.

Well I have two news: one bad and one good.

Let's start with the bad. It's officially a La Nina winter! Read this simple article on Surfline and you'll understand what that means. Make sure you'll flip through the four slides.

The good news is that, despite the presence of the bad girl, there will be a swell on Thanksgiving day! Hurray!
Here's the Surfline offshore swell forecast. As you can see there will be a NNW (the yellow one) swell, peaking Thursday morning at around 5.5 feet, 13 seconds from 334.
High tide (always a good thing for inside breaks like Paia Bay or Tavares, since more energy can pass over the outside reef) will be at 1pm, the wind shouldn't get crazy strong and that means solid perfect conditions for the whole day!
Note: perfect at Paia Bay means just as messy as usual! :) 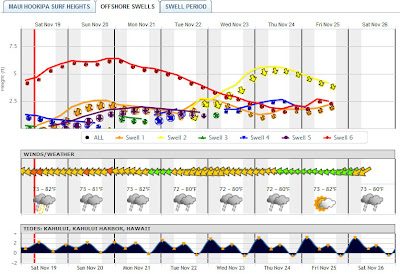 And if you're like me that don't just trust the outcome of the mathematical models that generate surf forecasts, here's the weather map forecasted for the 21st. You can see the fetch pretty much north of us that will generate that swell. That's in two days from now, let's hope it stays like that.

I'll post an update on Monday to see how that weather map turned out to be.
Competitors get your wax ready!!!

PS. I met Ian at the second public screening of the Minds Wide Open movie at Cafe Mambo yesterday.
I just want to say that, just like Jason Polakow's solo session at Backyards on the Windsurfing Movie, Kauli Seadi wave sailing solo session at Ali Baba in Cabo Verde is mind blowing.
Two amazing sailors, two different styles... would love to see them both together in conditions like that!
Posted by cammar at Saturday, November 19, 2011