little update before the big (stormy) swell will hit

The 2011 Paia Bay Invitational on Thanksgiving day was a huge success. 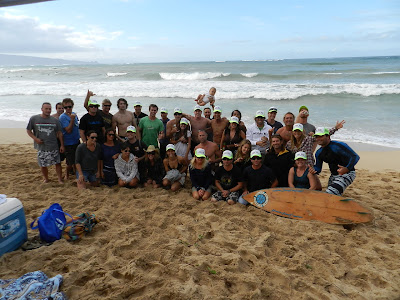 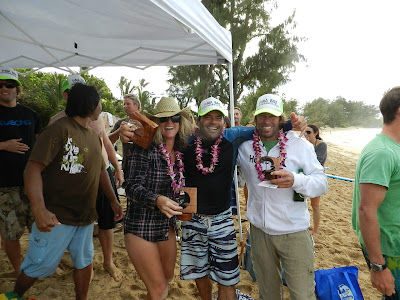 I shot some video clips, so stay tuned for a video that will hopefully give you an idea of the uniqueness of this competition.

In the meantime, this is the weather map of Friday 25th afternoon. That's the big beautiful captured fetch that will finally break this long sequence of November small days (which include head high days at Hookipa... it's all relative!).

The problem is that the high pressure that will move over the islands right after the pass of the front, will bring blustery NE wind and make the ocean conditions extremely rough.
That's always a high risk when the head of the fetch gets so close to the islands.

There's another big swell on the horizon though (the low in the upper left corner), and that one instead will be generated way more far away and will hit on Thursday/Friday when regular trades are forecasted. Should be epic windsurfing.

Here's what uncle Pat Caldwell says about this November:
The long-lived pattern in November with the jet stream further north over the northwest basin and consistent blocking ridges between the dateline and Hawaii has broken down. The counts of days in the small bracket are set to match the record in November 1994 of 19 days. Only two days of high surf occurred in 1994, which was well below the mean count of 7 days for November. Since no high days have occurred yet in November 2011, it appears the record of fewest high days could be matched or beaten this year.

Ok uncle, what's next?
The new pattern resembles the common late fall scenario with a steady pace of troughs in the jet stream progressing eastward centered on about 42°N steering gale to storm-force surface low pressures from the Kurils towards the gulf of Alaska. This pattern is expected to hold through next week, suggesting an active pace of episodes with peak days over the high mark into the long range.

Thanks, that's what we like to hear! Read Pat Caldwell's whole forecast here.
Posted by cammar at Saturday, November 26, 2011