good fun now, not next week

The NE windswell has been fun, but the next week looks as bad as it gets (for my taste): it will be windy but there will be no waves.

Let's have a look at the difference between the following two weather maps to understand what the difference will be.
This one is from the 10th (two days ago). As you can see, there's plenty isobars running over the islands, but a lovely low pressure east of the high pressure created a fetch that sent us the windswell.

This one is forecasted for Sunday the 20th. Still plenty isobars over the islands, but no fetches of wind oriented towards us (other than the eastely trades, of course). High pressures dominate the north Pacific and the whole next week looks pretty much like that.
To the point that even the annual "Paia bay invitational" on Thanksgiving day seems to be at risk of small waves!
Well, these long term forecasts can change, let's hope for the best...

Windswell had been fun, I was saying. Hookipa was pretty gnarly, but the tough guys were out there. I clearly wasn't, but photographer Paul Karaolides was and I stole these two pictures from his gallery.

This is Mark mid mutant. You got to check the whole sequence in the gallery. It's hard to believe, really... 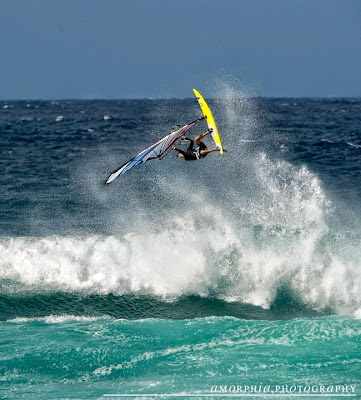 These, instead, are a bunch of turtles that came on the beach at Pavillons (thanks Patrick).
Did you notice how many turtles hang out on the shore break at Hookipa and pop out their head right there?
Well, my theory is that they're checking out how busy is the beach to eventually come take a rest, a poo, or whatever they need to take. They end up never doing that, since there are always a lot of windsurfers (at least, when I see them). In other words, in believe that we, windsurfers, bother them, just for the fact that we use the beach (and keep it busy). I don't think it's a huge deal (they can always beach at night and judging by their number in the water they seem to be thriving), but I do feel like sorry for them... 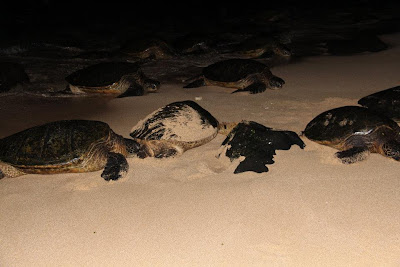 The gallery is unfortunately unaccesible...