support the relocation of Kuau Mart

Just received this email from Matt Meola and happy to publish.

I would like to personally invite you to join me in supporting the relocation
of Kuau Mart.
Albee Layer, Hank Gaskell and I are hosting our premier of
Taylor Steele's Innersection at the
MACC on Wednesday
November 30 at 7:00.
It is a fundraiser for Kuau Mart.
We are going to give away a lot of stuff plus 3 surfboards including my favorite -
an SOS Shapes Slushi.
Taylor Steele will be there, Lily is going to sing a few songs and it should be
a fun night.
If you can't make the premier and want to make a donation,
you can make a check out to Kuau Mart and send it to me
Matt Meola
15 A Kaimao St
Paia, HI 96779 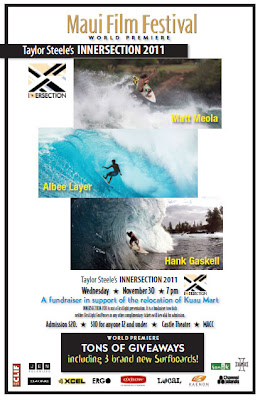 PS. Little update. The big swell arrived and, as forecasted, it was big, messy, choppy, closing out and with a lot of wind on it. It was an epic day for many visitors, but, spoiled as I am and with my peculiar taste, I would rank it as a mediocre day. I'd rather take head high light offshore with 5-6 turns than those mast high rough waves with only a couple of turns...

PPS. Second contest of the Triple Crown of Surfing live now at Sunset beach.
Posted by cammar at Monday, November 28, 2011

so I don't get it. Donations for relocating Kuau Mart to where? Why do they need donations? Shouldn't they be able to find their own location and re-open if they choose to?

Where are they relocating to? I remember you posting the story about their rent being raised so much they had to give up the location. Nice to hear they're still going to be in business.

I used to stay at a cottage near the bottom of that little hill when I was on vacation.