A SUP foiling and a windfoiling session for me. The foil saved my day (from the ocean activities point of view, of course), as I would have not been able to find anything fun enough to do without it. Particularly the windfoiling session was a 9 as there were some waist to shoulder high waves at Kanaha that were extremely fun to ride. Here is a video by Jeremy Riggs of a recent downwinder on the Kihei coast. The foil downwinders is a discipline I still have to master, but there will plenty opportunities to learn that in summer time.
Foiling Downwind In South Maui from Paddle With Riggs on Vimeo.


4am significant buoy readings
South shore
No indication of southerly energy at the buoys, the Surfline forecast calls for nothing

4.4ft @ 10s from 4° (N)
2.9ft @ 6s from 26° (NNE)
1.9ft @ 11s from 357° (N)
The NOAA stuck to the WW3 predition and issued a high surf warning, but the numbers at the buoy are barely justifying a high surf advisory as the swell is a lot smaller than predicted. It's true that I sample it only once a day (so I might have missed its best moments), but the fetch of this swell never really impressed me, as it was more of a strong ridge of high pressure than a deep low. The collage below shows the graphs of the three reported buoys, together with the Surfline forecast. As you can see, the swell barely reached 10 feet at the NW buoy, and is peaking at Hanalei at 8.5f. I doubt it will get bigger than 8f in Maui, what perplexes me is that the forecast still indicates a peak of 12f 15s in Maui this afternoon. I would expect their model to adjust its output after the swell hit the NW buoy, but it didn't.

What is confirmed, is the stormy character of it shown by the multiple different periods all arriving simultaneously. That is due to the vicinity of the fetch. Relatively big, stormy, windy and very consistent (borderline dangerous) is my guess for the exposed spots on the north shore, better seek for something sheltered or the west side.

North Pacific shows a sliver of NNE fetch in the Gulf of Alaska and a small N windswell one.

Couple of fetches in the South Pacific. 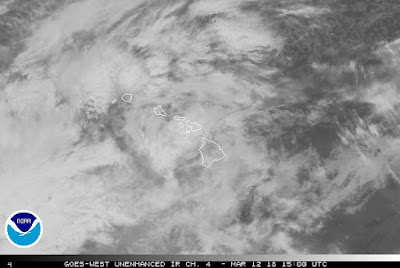 5.55am rain radar shows a lot of rain south of us. Some of it should hit us this afternoon, but most of it will hit us tomorrow and Wednesday, according to Windguru.