The silent bees in action. 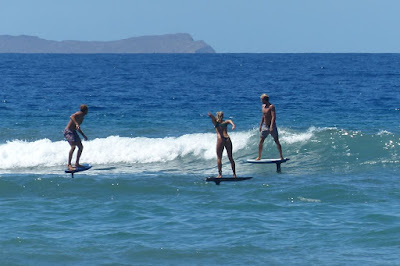 The queen bee in full swing. Despite clearly seeing the attractive part of it, I keep being completely uninterested in the pumping aspect of foiling. Mostly because of the unfortunate mix of my old age and the hard core fitness workout that it implies, but also because the foils that facilitate glide and pumping have contrasting characteristics for the carving aspect, which I highly prefer and don't feel like compromising. 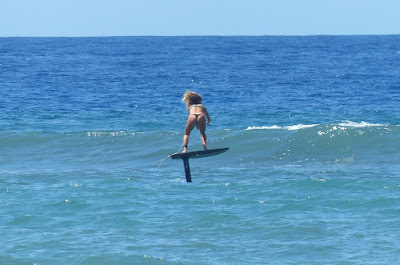 The predicted Tasman Sea swell is in the water. Check the Lahaina or Kihei webcams if interested, for size, conditions and consistency. 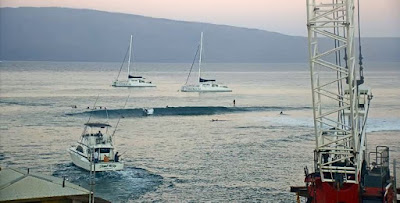 New very small WNW swell is predicted to slowly rise all day. Nothing to be excited about, as it's going to barely visible compared to the NE windswell. Here's Pat Caldwell's description of the fetch (timing is for Oahu):
A storm-force, compact low was caught in a zonal jet to the NNW of Hawaii (1800 nm away) Wednesday morning 6/2. It raced toward the eastern Aleutians. Highest seas within 20-25’ were aimed well NE of Hawaii. The fetch size and duration were sharply limited. A short-lived event could brush the north shores rising Saturday, peaking Saturday night, and dropping Sunday from 320-350 degrees.

Below are the maps of June 1 through 3 that will help follow. The fetch was very modest indeed, nonetheless the PACIOOS Pauwela forecast below shows the swell reaching 2.5ft 13s tomorrow (yellow dotted line in the top graph). If true, that will bring some sets, but again, only tomorrow. In contrast, the Surfline forecast only calls for 1.6ft 12s during the night. We'll see.

Home guess for Hookipa is for chest to shoulder high sloppy windswell. 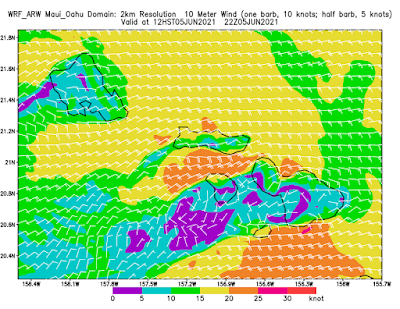