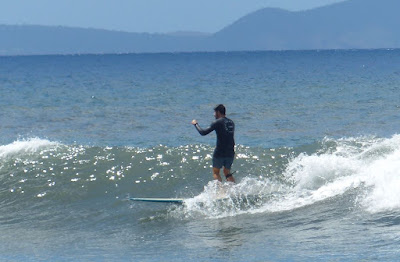 Tasman Sea swell still at the buoys, even though it seems to be smaller than yesterday. Check the Lahaina or Kihei webcams if interested, for size, conditions and consistency.

NW swell barely got up to the 1.6ft 12s predicted by Surfline during the night. As you will remember, the Pacioos forecast instead was calling for 2.5ft 13s instead. In the graph below, I put a a couple of red arrows to indicate the following:
- lower arrow: the difference between the open ocean swell prediction (blue dotted line) and what really happened (red dotted line)
- upper arrow: the gap that created in the significant wave height prediction (blue solid line) and what was instead registered (black solid line).

So this swell didn't produce much at all, but it allowed me to point out that the Surfline forecast was spot on and how to read the Pacioos forecast that I post every day. You can see from it that there's absolutely no sign of any further ground swells in the forecast period (till June 12), but only windswell.
Summer seems to be taking over, at least for the foreseeable future.

Home guess for Hookipa is around chest to shoulder high sloppy windswell waves. 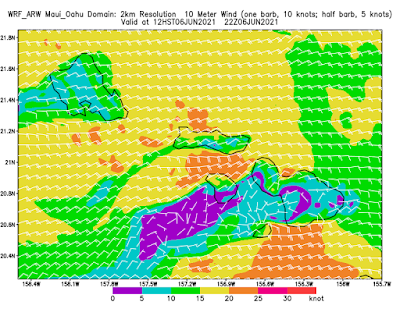