back on the camera

After a first week of complete rest with the foot elevated, I'm now stepping out and it definitely feels good to be in the sun again.
I can't even imagine how good it will be to be in the water again...

Despite the lack of ground swells, Monday and Tuesday Hookipa looked quite a lot of fun with offshore gusty wind and windswell sets. Or maybe everything looks good, now that I can't do it! It's like women and abstinence. After a while, they all start looking better...

Anyway, the photo of the day(s) goes to Boujmaa. He's so much fun to watch! 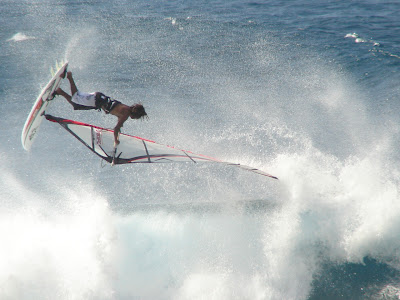 As you guys probably know by now, on March 31st an underground jumping contest was held. Boujmaa only got the GPS device to measure the jumps late, but he logged a 62 feet high jump (no rotation). Levi got the highest backloop at 52'7".
Congrats to both, here's the video of the contest by Jake Miller.
Now, if Levi went to 52 feet, how high did Nico go in his famous mega backloop?

Here's the other photos in chronological order, starting from Monday.
Victor. 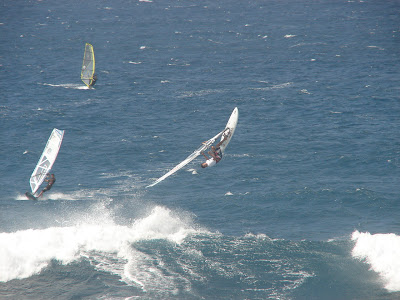 Philip Koester working hard on his skills on starboard tack. 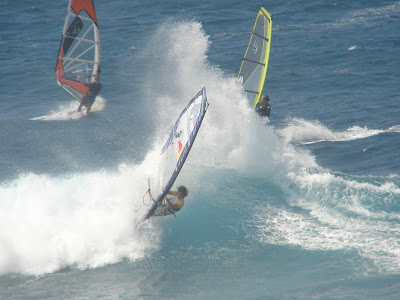 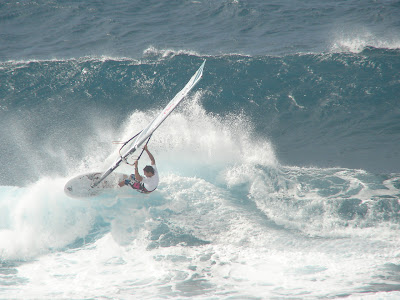 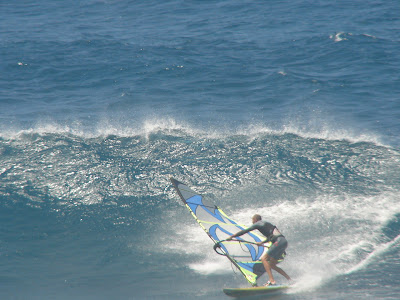 Here's my setup. The guard rail is key to keep the foot elevated, but it's a bit in the way. So I put the chair on that pipe to gain a couple of inches. Now I only need a couple of blocks of foam to make the chair arms a few inches higher and I'll be perfect. Couldn't find them in my garage, if you have them at home, please bring them next time you go to Hookipa... 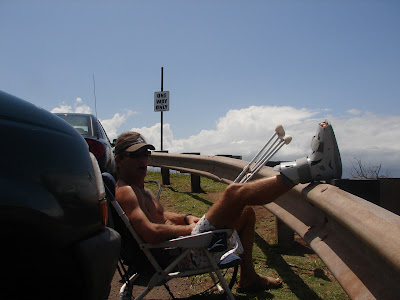 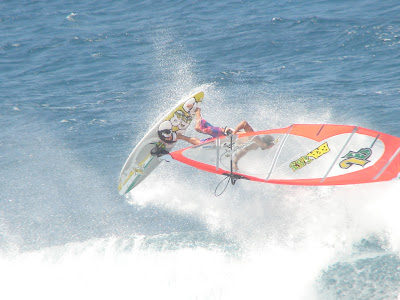 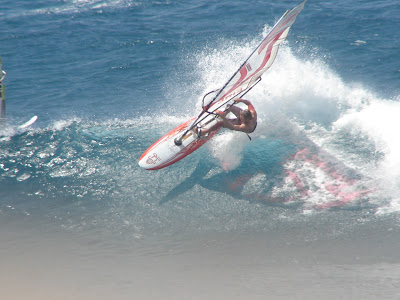 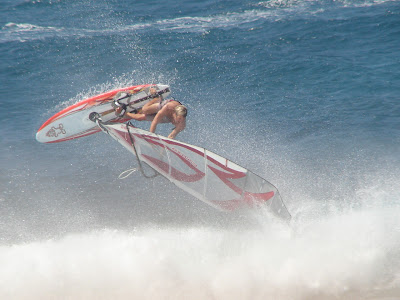 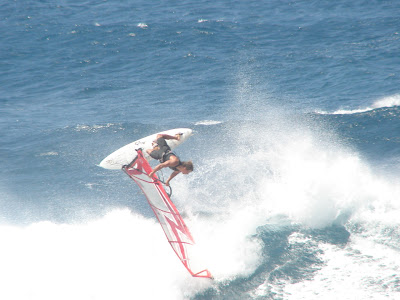 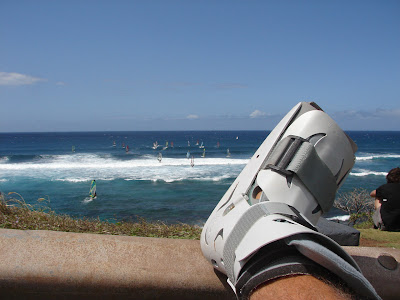 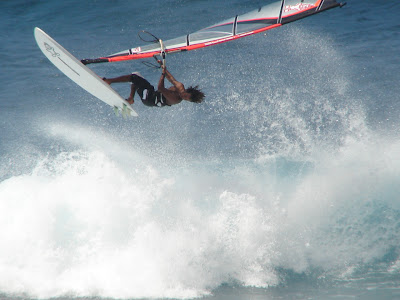 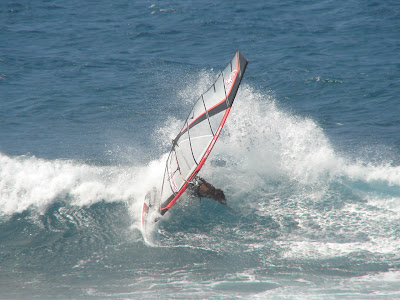 If you don't know how the current works at Hookipa, it's likely that you will need help to get back to shore. 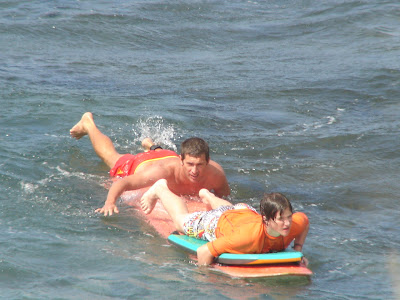 Mmm... I think this is Timo Mullen. Btw, I met his brother Finn (super nice guy, just like his brother), who told me the story of his injury.
He broke a foot just like me in a heat of a contest. Ho took some novocaine, kept sailing and got to the final. A few seconds before the end, he went for a double forward and crashed badly.
Later at the hospital he was diagnosed with a broken foot AND a broken shoulder. Now, that must be a record...
Two months to heal the foot and five to heal the shoulder. He won the contest, but was it worth it...?
Now he's in Maui and he just got back in the water. First session after five months: Jaws. This guy knows how to take it easy... 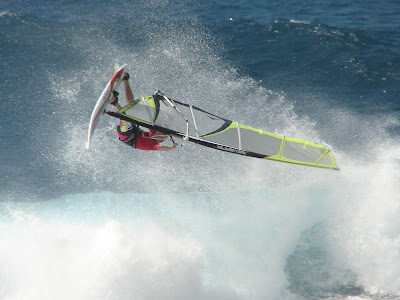 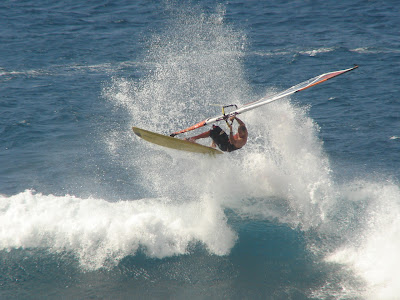 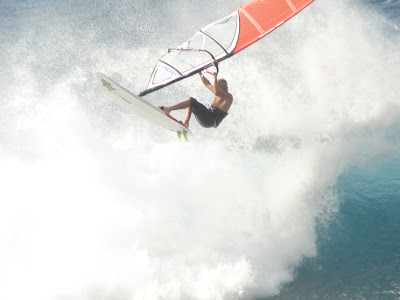 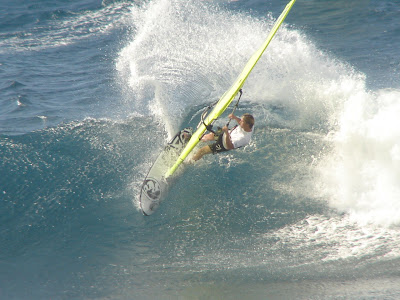 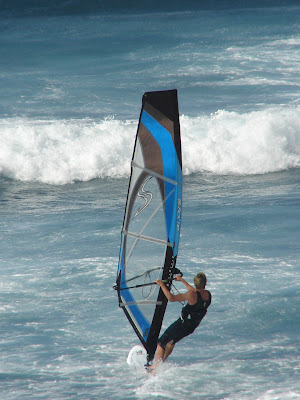 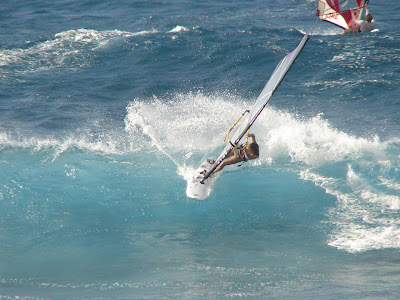 Is it just me or is Boujmaa ripping harder than everyone else these days? Granted, I'm an ocean away, but he's been more impressive with less exposure than anyone I can remember...

Nice to see you have transitioned to a smaller cast size. Also, you see, even if you're grounded your foot is still on the rail, not exactly the board rail, but still on a rail! (ok questionable humor)
It's seems all the euro pro are in Maui, is it because of the photo shoots or are they training also?

I hope you have a quick recovery.
I see you have underarm crutches, the forearm crutch is much easier to get around on, it's even possible to walk without any feet touching the ground. I have tried both in the past.

See picture on the left.

I read your comment "it's like women and absinthe" rather than abstinence. Abstinence and you don't seem to fit somehow!

Nice you are able to top up the tan and film and critique your chums. Are you able to drive or do you require a chauffeuse?

great photos! just curious, what kind of camera and lens did you use for these pictures?

Yo Aaron,
everyone out there is ripping pretty hard. Boujmaa is just the one that goes for the craziest stuff, but doesn't necessarily land all of them. Other sailors are more focused on working on perfecting their basic moves. A good example was John Skye on Tuesday. A bit less spectacular maybe, but very effective landing most of his moves.
It's quite a show, that's for sure.

Tony, they're for the shoots, but sure enough they train too.

Ryan, I know those crutches are better. Couldn't find them in Maui. Seems like crutches is another of those rare fields in which the americans (at least in Maui) are not the leading edge.
Another example is gas stations accessory. 2 out of 3 gas stations in Paia don't have air for the customers and more than half island stations have the air, but with no gauge. You have to use an external pen-like gauge... shocking.

Anne, trust me I had my moments.
My car has automatic transmission and I can drive no problem using the left foot.
Hey, maybe by doing so I'm getting better at wave riding port tack!

Anon, my camera is a simple point and shoot. Sony DSH-1 with a 1.7x telelens. Most of those shots are actually overexposed, but they're good enough for me.

Watching the Rip Curl Pro live while doing this. Kelly Slater is competing with am hairline fracture on the top of his foot...

Just to set the record straight, all three gas stations in Paia have air, one is free to use, the other two cost a small amount ($0.50?). Two out of the three have gauges. The pumps are in plain view and easy to access. There is no way to miss them.

Well, I didn't check lately, but a few (or several if you like) months ago only one had air and often that was out of service. If you need air you had to go to Kahului.