Wednesday April 21st 2010 was a day to remember for Mark Angulo.

He must have read on my last post that the other guys are now trying his mutant and immediately stepped up by increasing the level of difficulty: he's now doing them clew first.
Actually, most likely he just felt it coming in one of his clew first rides and went for it. A few tries was all it took him to stick one. Not sure it's this one, but it's impressive enough... what do you think? 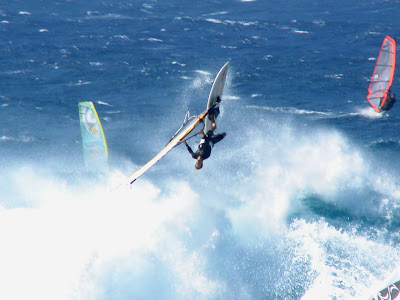 Here's the other photos in chronological order.

Polakow had to leave the day after and even though the waves weren't as big as yesterday and the weather was pretty squally he called a JP photoshoot with his cell phone:"ok, we're on at 2 o'clock", I imagine him saying to the guys waiting at the heliport.
Didn't take Kauli much to do something worthy. 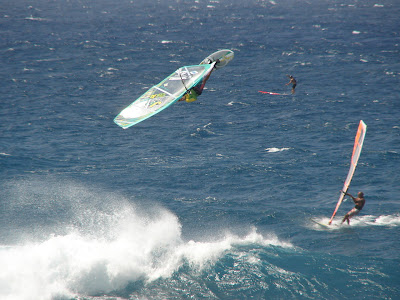 Soon to be followed by Swifty. 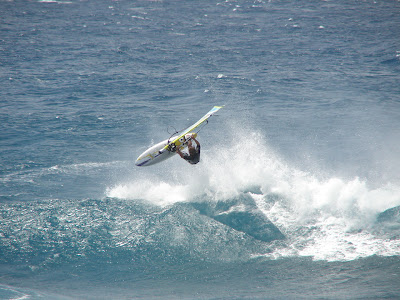 Mark, when he was still doing the regular ones. 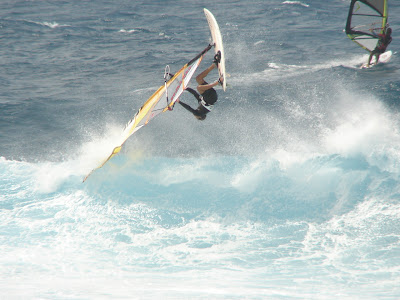 Campello (I bet Francky got a good shot). 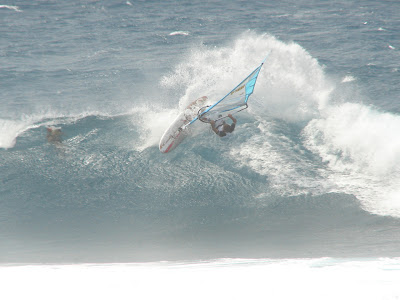 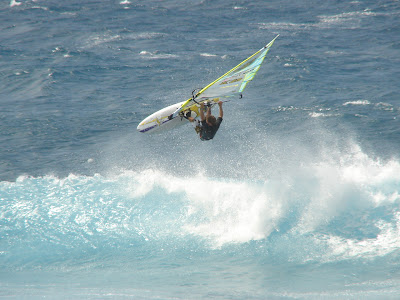 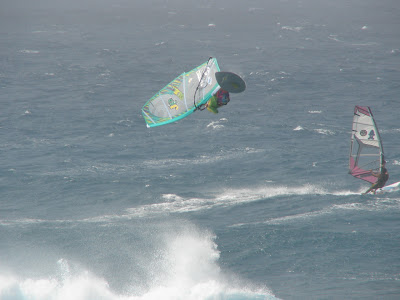 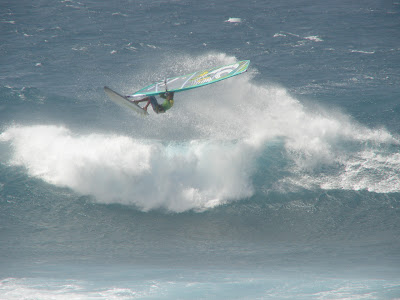 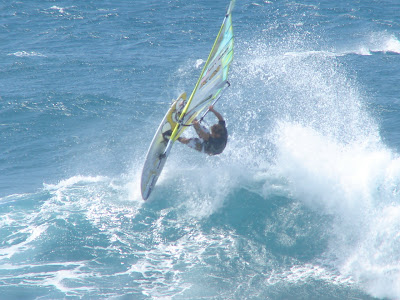 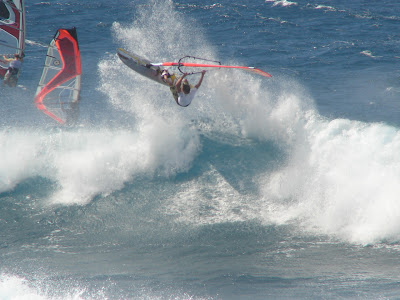 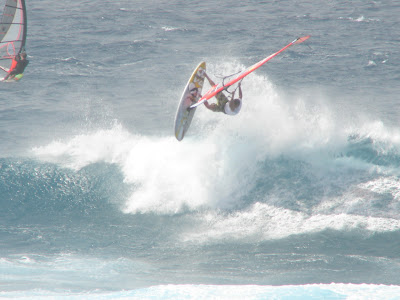 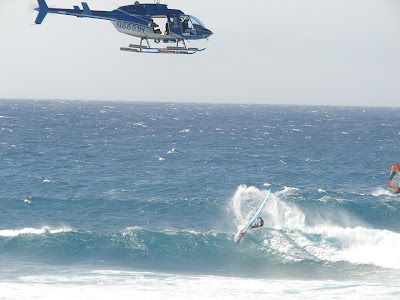 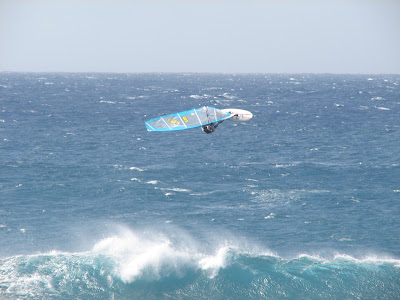 Considering where he is on the wave, this might well be the clew first one that Mark stuck. Plenty people filming on the beach, expect that to be online soon. 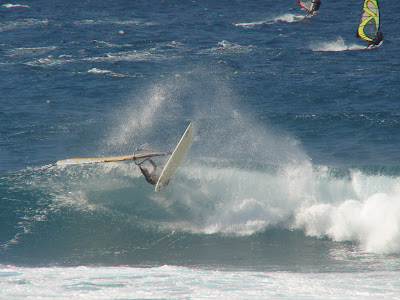 This is a mini sequence that shows another attempt. When I first saw this photo, I though:"what? that's quite a lame bottom turn all sheeted out like that...".
Then I figured that it was clew first and the left hand on the back of the boom is actually the front hand, so he's sheeting in the mast side of the sail with his right hand. My brain gets confused only at seeing such a thing, imagine at doing it... 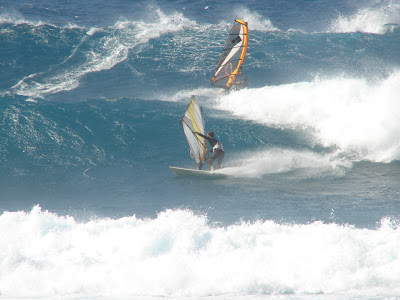 I mean, how rad is that? 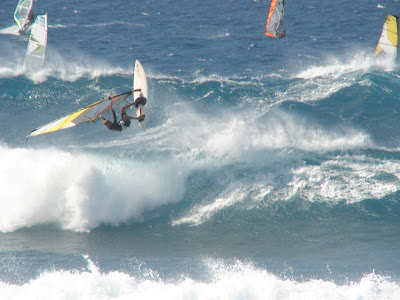 Victor doing something rad too, but I don't know what. 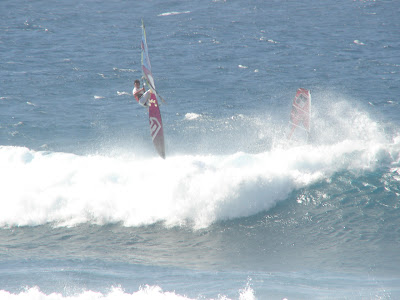 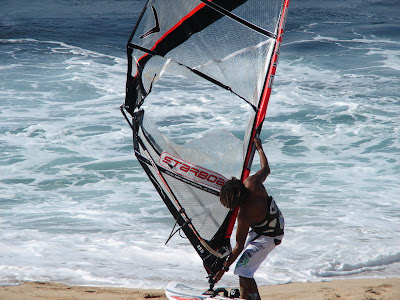 Swell on the rise today. I start working again today (at least I'll try), but I'll be at Hookipa in the late afternoon, so stay tuned.
The NW buoy went up to 8 feet, 15 seconds out of 323 at 6am, while the Waimea buoy is still at 4 feet, 16 sec.
Considering the travel times, expect some big sets in the late afternoon.
Here's an article that describes the travel times (for Ben... and not only). Hope you guys can read it without a Surfline account, please let me know.

Also, big thanks to Marc Serra, who in the last post suggested some photoshop adjustments for my photos. Marc, I did adjust the levels and contrast manually (the automatic one does bad results on most photos) on the very top one of Angulo, but I didn't have the time to do that for the others. Merci.
Posted by cammar at Thursday, April 22, 2010

great shots as always. just imagine what mark would have been capable staying on the circus, awesome action

Hei GP. great fotos again ! I think victor is doing A front loop off the lip !!

GP - I was able to read that w/o subscription. Thanks for sending that. I'm still wondering if we we're seeing a bit of the new swell late yesterday. From PC's forecast "Buoy 51101 WNW of Kauai shows long period forerunners of 17-21 seconds on Wednesday morning. Surf should build locally late Wednesday afternoon from 310-320 degrees.". And at uppers every so often there seemed to be a much bigger wave from somewhere.

You must have taken one of your shots about the same time as this
http://2.bp.blogspot.com/_DDQJHcAYzgA/S9ALOxCACOI/AAAAAAAACBI/t4TSmUDvR-k/s1600/P1010866.JPG
and I was thinking the same thing - should be a nice close up! Aloha - ben

What happened to Mark Angulo? I'd love to hear his story. I remember he ripped in the late 80s then kind of disappeared. Now he is like totally back. Will he ever compete again?

By the way, my first real waveboard was an Angulo 8'3" that I had built custom in 1987. That thing absolutely ripped. I've got to dig it out and see if it still rips - I bet it does.

Thanks for the comments!

Ben,
the Waimea buoy yesterday was reading 1 foot, 20 sec at noon and 2 feet, 18 sec at 6pm.
The link is http://www.surfline.com/surfline/lola/by_106_wvs.jsp, but to read that, you do need a surfline subscription.
Travel distance is 1-2 hours. So, it's definitely possible that you detected some longer period sets, but if they were "much bigger", I would probably guess that they were just bigger sets of the windswell, which at the same times was 6 feet, 9 seconds from 55 degrees at the Mokapu buoy.
A 10 seconds difference in the period is quite noticeable in the water, so think about the period and you'll know which swell it was.
Actually there was a third swell, the Tuesday one, still lingering around on its way down at around 12 seconds period.
In the end, what counts is that you were there...

Last Anon,
seen the broken sail shot, it's quite easy to guess that the Windsurfing Movie 2 will satisfy your curiosity.

Hey GP! Keep that foot up at work. I am almost 60 and can still rip (a little tear now and again at least)so you will need those bones in the years to come! The photos look great, even better then JaminJ's (Ben's)- seems even though he has the new camera he has started using a 'lossy' photo imager (haha read it and weep Ben). You all do such a fine job on your blogs I feel like I should subscribe. Could you please describe the mutant again? Thanks again, this is a lot of work and little reward - may you meet the lady of your dreams and live happily in Haiku...and may she have a daughter....

The mutant, IMO, is an aerial wave 360 off the lip done with an arched body.
The first clew first 360 of history (at least at Hookipa) is in this clip: http://www.youtube.com/watch?v=iA4RcD4P4-4&feature=player_embedded
That one is not "aerial" and is without an arched body, so IMO is not a mutant clew first.
Honestly, now that I see it better, even though it's clew first, it's way less impressive of a mutant, because of the lack of the aerial component and the arched body.
The first amazing shot of this post is an example of a clew first mutant attempt.
And amazing is not refered to the photo itself but to the action in it...