Well, I have been windsurfing pretty much full time for 29 years and I finally broke a bone doing it.

Maybe not full time for 29 years, but I've been windsurfing for quite some time too and here we go, here's my Broke Da Foot post! (sorry Jeff, I had to copy the pose of the photo too...) 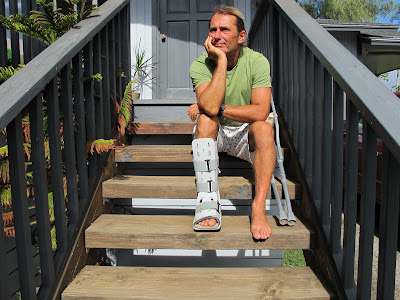 How did I do it?
The usual: mistimed a hit to the lip (it was around 6pm and the glare from a very low sun almost blinded me) and the lip sneaked under my board and kind of exploded there. In other words, the lip hit the bottom of my board instead of my board hitting the lip. Subtle but big difference. I didn't see it coming (because of the glare) and I wasn't ready for the impact, which I though would have happened a couple of feet higher and a fraction of second later.

The hard part was to schlog back to the beach (quite upwind from where I was).
Fortunately there were still a bunch of local sailors when I landed and they carried me to my car, derigged my gear and gave me some ice: thanks a lot guys!
Got to love automatic transmission in this cases...


Foot injuries are so common in windsurfing that I always considered it just a matter of time before it happened to me. And I was so ready for that, that I'm not even bummed!

Well, first of all, as you can see from the x-rays below, the fractures are so small that if there weren't those little arrows it would be hard to see them.
The bones have kept their integrity. There's only a few cracks... like dings on the rails of a surfboard.
So, it could have been A LOT worse. 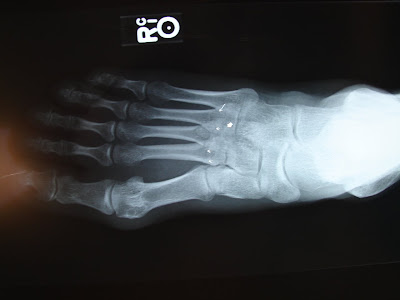 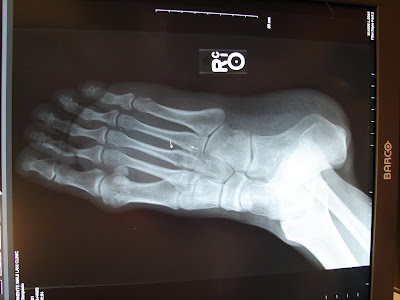 The x-ray that was on the screen of the doctor's computer before he showed me mine, for example, showed a huge metal plate with something like 10 screws inside someone's leg. That made me think of Matt Pritchard's injury or all those gnarly ones that Polakow has picked up in many years.
Guess what, both of them are still windsurfing and ripping... mine is going to be a piece of cake.

Just an extended period of rest (didn't need a cast, but can't put weight on it for a month), at the end of which I'll be pretty stoked to get in the water again.
What, no carbon crutches for GP? 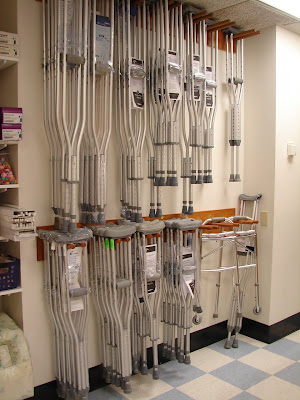 Here's a list of things that helped me accepting the injury with ease:

1) it's the end of the winter season. The best winter wave-wise since I'm here. Had it happened at the beginning or in the middle of it, it would have been a lot worse. I could have missed waves like this. 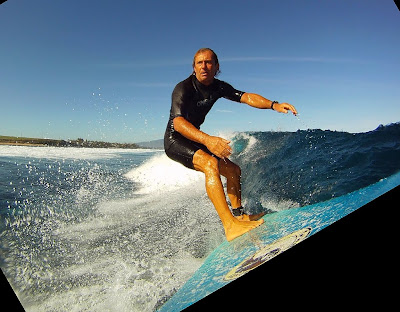 2) it will give me the opportunity to do something different. Like playing Ukulele, for example.
Dedicated to all the windsurfers out there.

This is the original.

3) it happened while doing one of the things I like most.
To minimize the risk of getting injured, once in the forties I pretty much decided not to jump. But riding waves and hitting lips... that's what it's all about and the risk of injuries is part of the game.

Had it happened while coming down a staircase it would have been a bit harder to accept... or doing arm wrestling (!), like it happened to this one guy in Italy, live on one of those horrible TV shows.
WARNING: the video shows his arm breaking which is a pretty damn horrible thing to watch, so it's not recommended if for people sensitive to these kind of things. Here's the video.

PS. In case you didn't notice, this is another example of "everything is possible": I'm out of the water for two months and I'm not even bummed... unbelievable.
I'm absolutely loving the level of my... how to call it... maturity, detachment, enlightenment?
Day after day, there seem to be less and less things in this world that have the power to alter my natural state of happiness.
I'm way more proud of my skills in this field than in any other water sports, that's for sure.
Might have to start a blog called Mauizenreport...
Posted by cammar at Saturday, April 03, 2010

"Bummer, but remember... it could always be worse!"
That's the comment you left on my blog when I broke my foot.
So sorry for you, I know what it means to be grounded for 2 months...
One question: why in the hell you need such a tall cast, I had a 5th metatarsal fracture yet I used the smaller cast.
BTW your ukulele skills are far superior to your sailing skills I'm very impressed (just kidding dude, you rock)
Wish you a speedy recovery!

GP - bummed for you but you'll be fine. As you said, Matt's double shatter last year was about as bad as it gets and now he's back on the water. Have to a ask - what kind of foot straps do you use? I, along with many gorge sailors, switched to the dakine kiting foot straps mostly to avoid broken feet and sprained ankles. That's the theory anyway.

I have that tall boot because I was borrowing Jeff's. Now I'm borrowing Alex's too (talk about common windsurfing injuries) and that one is shorter. I'll use the tall one for the parties... kinda looks better! ;)

I use the DaKine Primo. Back then I tried the DaKine contour (the stretchy one), but I didn't like them because the were too stretchy in the bottom turn (I know some really good sailors that love them and some that hate them...).
Never tried the kiting ones. Will have a look.

Hope this won't stop you keep on writing on this blog! Sorry for this mate!

May you health quickly, strum lightly and have a smile on your face...

GP, I slipped jumping into my boat last summer and broke my little toe. It got caught a little in a groove in the floor for one of the storage compartments when I was landing on my butt. I thought, no big deal, it's just a small fracture but then it was windy as heck the next day. I couldn't resist and went sailing anyways. I had a great session but man did that little sucker ever hurt. I had to pass up a few windy days until it healed but it just gave me more time in my kayak. I figured one or another I'm getting my water time in ...

No fun at all. We hope you get better soon and take it easy on the re-entry. Pun intended - the foot is a real pain to heal and so go slow on the return. Take Care

David
waterhound.com
Posted a little get well article for you.
http://www.waterhound.com/maui-surf-report-hobbled-by-broken-foot.html

thanks everyone for the comments.

David, thanks for the article, much appreciated. I'll be easy with the re-entry. I actually don't plan to get on a windsurfer sooner than september (why bother in flat water?), unless there's some out of season swells of course...
But I'd love to get on a surfboard in a couple of months. The right foot is the front one in my stance and that's a good thing. But those are stupid expectations created by my mind.
It will be what it will be, and I'll be just fine with that.

What happened to the hair on your left lower leg?

Bold spot due to ski boots.
Left leg bolder than right.
Can't say my readers are not good observers...

Bummer G.P. , I wish you a speedy recovery! Will be nice and different to see what you will be posting on the blog during your dry spell. No doubt will be very entertaining!

Go back to IBM for a couple of months. Miss Maui, then come back and put in a "Everything is Possible ch 7".

Its good reading for us.

I wish you a speedy recovery!

Too bad you couldn't have played that song Sunday night instead of leaving me to flail all by myself on the banjo. HAHAHA!!! Those three uke chords really come in handy!

All the best to you,

Sorry about that...
Get well soon.

broke da bone brah! heal quickly mr mulletude ahh er canmar coming to Mecca next week, prolly see you at kanaha kai.... maybe. I hope more wind then last year at this time during the hotsails meeting.
anywho, get alot of broccoli or milk to calcifi your diet, whatever your pleasure and heal that bone. hoping to see you around not that you'd know me , jeff aka shredulato

GP, feel good and get back in the water soon.
I really like your blog and reference it many times in mine.
The EIP series was very good, mainly part 2 that was how to say "shocking".
I deal with X-Rays when I'm not wet and you may want to upload yours to www.xrfiles.com where you can store them for free for future reference and get them reviewed by your doctors.

gp - nice to hear your zen is in shape! looking forward to seeing your fashionable boot(s). we girls understand - having one pair of stilettos is never enough. heal quickly!

argh broken bits! I'm just coming up to 3 months since I broke a bit off my ankle wavesailing down here in NZ. Did the late lip hit followed by some sort of pitched forward down with the lip and then got front foot stuck in the strap while it twisted. Session log here.
Have tried one small surf so far, but will be while yet before windsurf I reckon :(

Hope you have a fast recovery and man am I jealous of a removable boot - I missed out on the whole of summer here due to a fibreglass itchy one.. So yeh you got it easy! :P

I'm very sorry for your foot...I'm looking forward to seeing you on a surf board again with your fav porcupine tree soundtrack!