Just the right amount of offshore wind in this spot on the Lahaina side yesterday morning. It never lasts long. 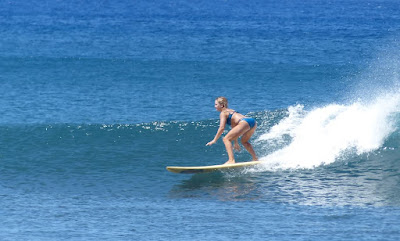 Here's Gavin on a wave we shared. 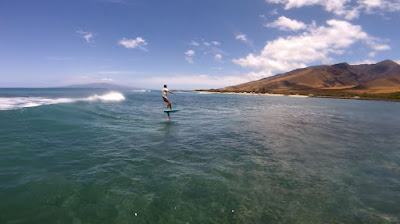 This is a video of a SUP foiling wave, filmed from the front footstrap. Wave starts at 0:50. The cutback at 1:07 felt like snowboarding on air.

1.5ft @ 17s from 180° (S)
1.5ft @ 12s from 185° (S)
New small long period south swell clocking in at 1.5ft 17s with another 1.5ft 12s of background energy still in the water. Check the Lahaina webcam if interested, for size, conditions and consistency (looks smaller/slower than what the buoys would suggest, but there's occasional sets).

Windswell is still up and will continue to be so for several days ahead. It veered a bit to the east though (read direction at the buoy and also compare the spectrum graph below to the one of the past days), so it might hit Hookipa a bit less. Home guess is for waist to chest high and sloppy. Bigger on eastern exposures.

Here's a weather update from this NOAA page:
A blob of warm and humid unstable air belonging to once Tropical Cyclone Guillermo is forecast to settle over the islands between Sunday night and Tuesday. This air mass will be influenced by an upper level disturbance leading to a thunderstorm or two over the offshore waters. 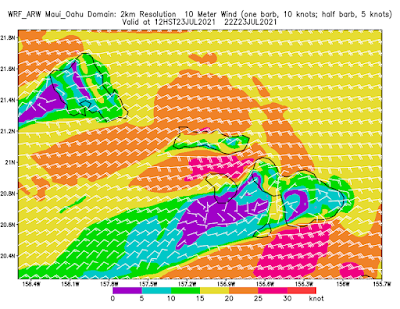