Yesterday was another pretty good day to take photos at Hookipa... I'd say!

I have four favorite photos today, which I will post in chronological order. 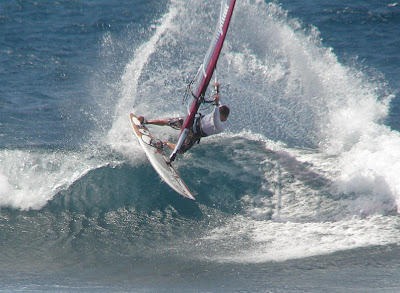 My $300 camera screen goes black for a moment after it takes a shot. So I'm not even sure this actually was a high stalled forward, but judging from the back hand so far back on the boom ready to sheet in and from the angle of his board, there's not much to doubt about it.
Diony executes beautifully. 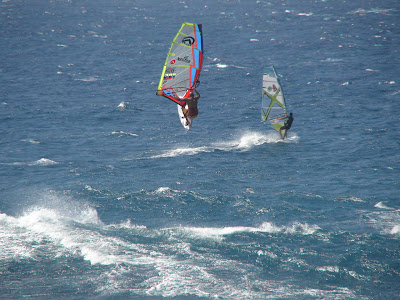 Funny how Kauli is the one that started the return of the multiple fins, but he's also the one that uses them less! (at least in the top turns).
Follow the trajectory of the tail of his board... See? The fins are completely released. He completes most of his turns by sticking the WHOLE rail of the board back in the face of the wave.
Actually, most of these guys do like that.
Light-years of distance away from us common mortals. 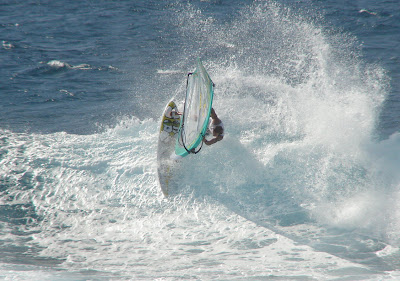 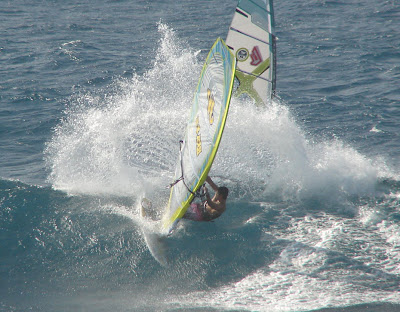 And now the rest of the photos in strict chronological order.
Some component of the team Fanatic enjoy a company provided lunch (Fernandez, Alonso, Jamaer, Baker, Vogt). 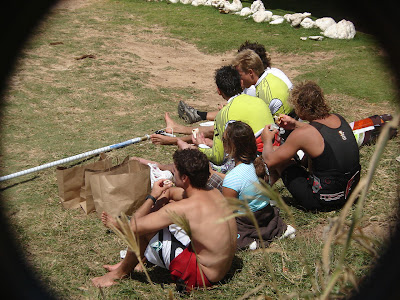 Jake did pretty good in the early not too crazy crowded session. 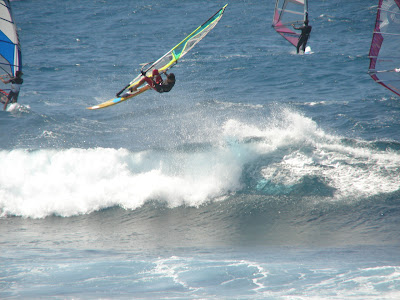 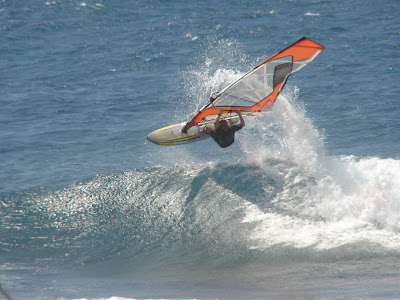 Check that out. Would love to try, would probably hate. 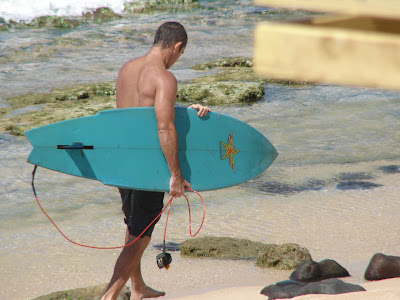 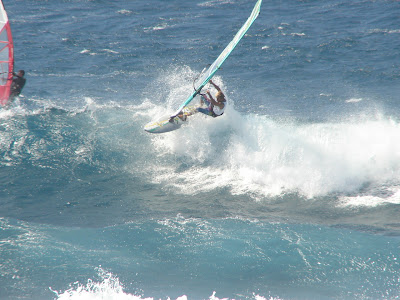 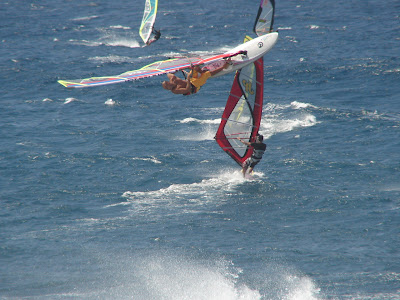 That's a five batten sail with the low batten ending on the leech above the boom... interesting. Sails with no foot (like the Hot Bolt Diony was on) have the advantage of not getting stuck in the lip as much (and of course facilitates a hell lot of freestyle maneuvers too).
I like the outline (and the colors) of that sail. Don't like all that monofilm though.
Victor. 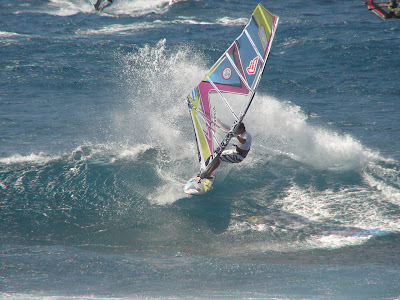 Jason Polakow stylish (?) underwear.
Don't be fooled by what may seem like belley wrinkles, 'cause this guy has a six pack that looks like a twelve pack. 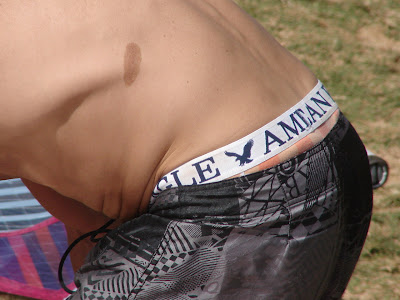 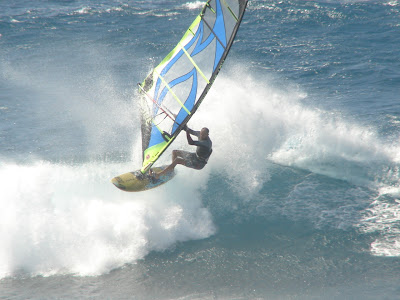 Diony. This shot would be in top ones if it wasn't a bit blurred. 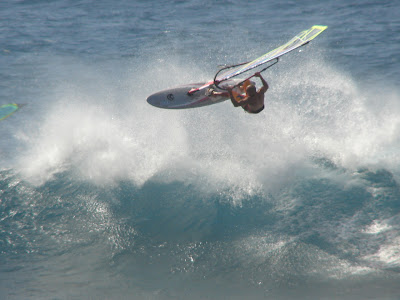 Kauli, riding to the very last bowl. Did you guys notice I changed the place where I sit? 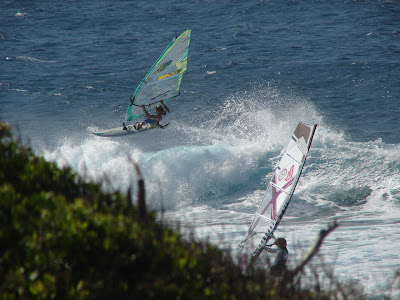 Kauli, spectacular at every single turn. 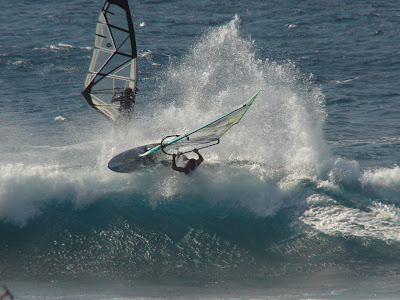 A seal showed up on the inside. I was chatting with Camille and I asked him how is seal in French: phoque. Pronounced fok... 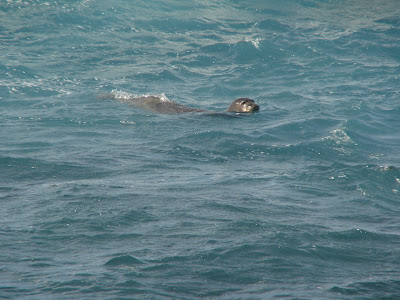 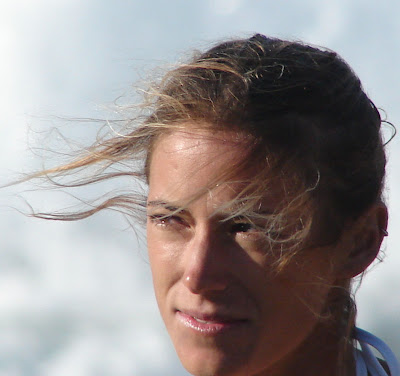 She looks cute and sweet. 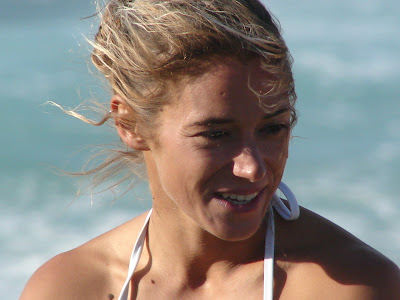 The most radical sailor of all times goes for an SUP surfing session.
In other words, JP's working day is not over yet. 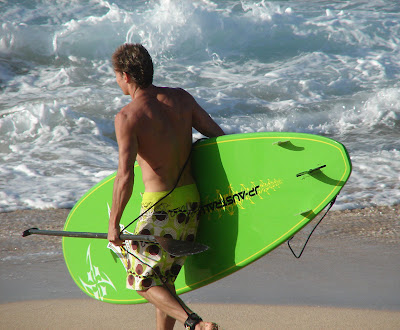 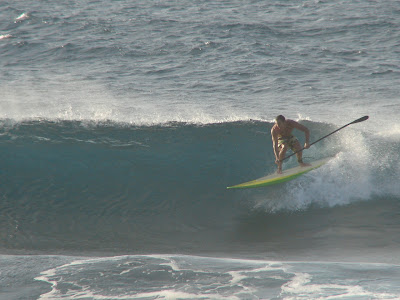 Knowing when to bail is key. 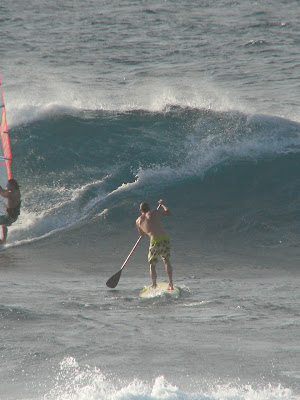 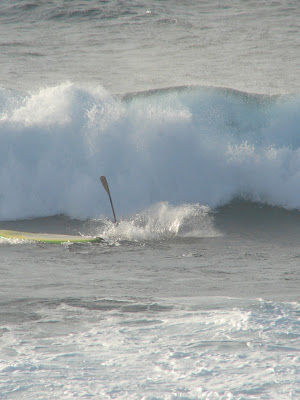 Andre Paskowsky's alternative use of a mast foot bolt. 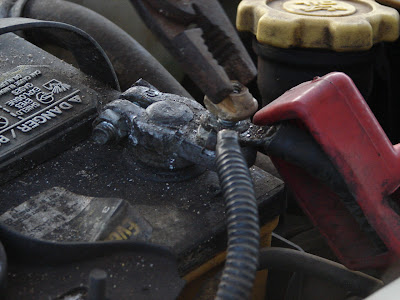 Today, it's going to be a big show. The NW buoy went up to almost 6 feet, 13 sec from NNW in the wee hours.
Now, if you go to the NOAA site and check the Waimea buoy, the only measurement shown is the sum of energies of ALL the swells hitting it at any given moment: almost 7 feet at 6 am.
In this case, the swells are:
1) the 6 feet, 8 sec, out of 20 degrees windswell (most waves in this post belong to this, since yesterday there were only like 5-6 sets of the forerunners of the new NW swell in the late afternoon) and
2) the new NW ground swell.
That would hence be a deceiving information.

Instead, the Waimea buoy Surfline graph below shows the two swells separately, and as you can see from the green line, the NW swell is still at 4 feet, 14 seconds out of 330 at 6am.
I can hence more precisely forecast that Hookipa will see the biggest sets (plenty mast high) in the late afternoon, let's say 4 to 6, also thanks to the push of a steeply rising tide.
That's also when the wind usually drops a bit and gets a tad more offshore and as a consequence the waves get cleaner... in other words, that's when I would go sail, if I could.

And what do I do with all that since I can't sail instead?
I guess I'll put extra batteries to charge...
Posted by cammar at Monday, April 19, 2010

Hi GP, am i right that you had an photo of the new fanatic boards lying at the car park at hookipa on your blog and now removed??

Nices pics, Maui seems to dish some good stuff lately..thanks to be there for us! (sorry...I just realised..you can't sail..when is the D Date?)

hi GP,
great posting!
It's funny to see that the marketing people from North sails decided the all-white iPod era was over...back to the colors! I also like the look of the new NPs.
Cheers,
Marcos

Nord Roi, I'd be stoked if I can surf in a month... windsurfing will take longer, but I don't care.

Marcos, yep I like North and NP too. But I'm part of 1% of the market that doesn't care about how the gear looks!

G, your injury is warping your brain , i know its jason polakow but no more waist shots of dooods .LOL, my brain cant take it , now i know i know you a morally advanced euro guy but....dont do it...kanaha was mental yesterday for us mere mortals 4.2 quad 80, and i weight 195 lbs.

Where is she (russian girl) stay? I would love to have somebody to talk russian with. Yes, I'm on island.