A SUP foiling session for me yesterday. It was the very first time I used a Maliko 280 (the biggest size made by Gofoil) and I can't wait to try it on a downwinder. Probably Wednesday.

Last Sunday there was a downwind race along the Na Pali coast of Kauai. I believe Kai Lenny was the only foiler and here's the amazing background he had while flying in solitude. 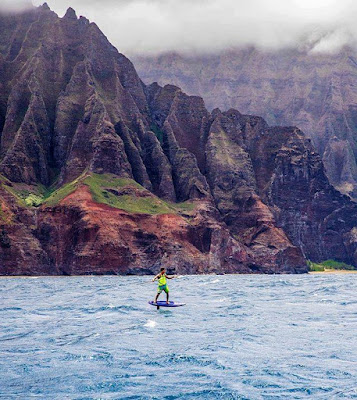 Big difference in size between the Barbers and the Lanai buoys. Same between W and SW. Well, in these conditions it's impossible for me to guess what the size is going to be on the Lahaina side, but fortunately I'll be there pretty early and report. My guess is waist to chest high with occasional bigger sets.

1.4ft @ 12s from 85° (E)
The windswell went way down and Pauwela is feeling a bit of energy from the E swell generated by Hector. This last one should increase tomorrow, but the direction should favor more exposed areas like Hana.

North Pacific has the same three fetches it had for the last three days:
- W associated with Shanshan
- N
- windswell (extremely weak today)
Hurricane Hector is approaching but we're gonna be blocked by the Big Island for most of the close-by wave generation. Once it passes south of it, we're gonna have a short window of southerly short period waves which, imo, will only interfere with the beautiful long period south swell. But there are spots that like shorter periods. 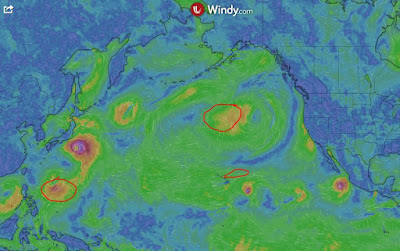 South Pacific is entering a quiet phase and today it only offers a small/weak fetch N of New Zealand. Notice the much bigger amplitude of the fetches of the Indian Ocean instead. 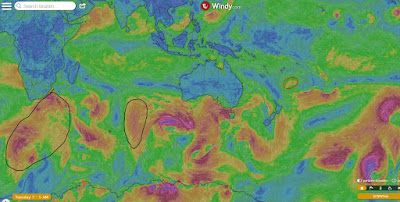 Morning sky shows Hector approaching. Looks powerful and menacing for sure. Fortunately predicted to miss us to the south. 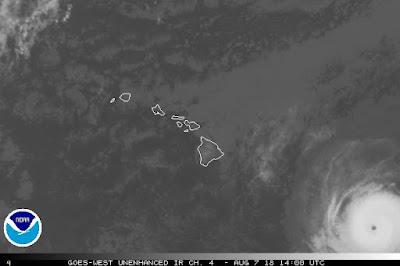