A shortboard session for me yesterday, which I had to cut short and immediately go see a massage therapist because my low right back pain got unbearable. I'm going to take a prolonged break and try to get rid of it before I leave in a week. The south swell in Lahaina was still very enjoyable (even though much smaller than yesterday), but here's some photos of much bigger waves by my friend Marco from Hamoa Bay in Hana. 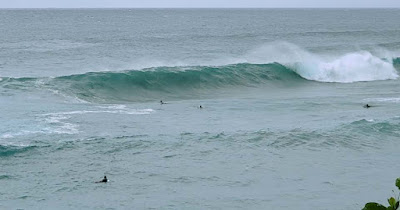 This is the long period ESE swell generated by Hector. 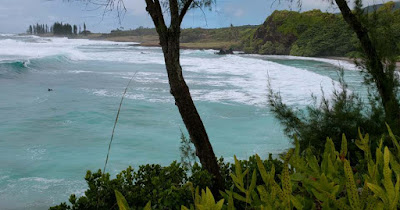 I'm going to explain why the period and size of this swell is going to be much bigger than the southerly pulse we're going to receive this afternoon from the same storm. Below is the collage of the fetch maps of August 4 to 7. As you can see the hurricane tracked westward towards the island chain. I added a small black circle to underline the fetch of winds directed towards us: very tiny, but intense and most importantly, captured. The storm produced waves in all direction around its eye, but only the ones that went in the same direction as the storm itself, got to be built further, as the storm kept blowing strong winds on them. Completely different will be the case tonight, as the fetch of south to north winds oriented towards while the storm was passing south of us, only lasted a few hours before the storm shifted more west. I explained this last case in detail in yesterday's post.

Let's start from the SW buoy reading. That's the very temporary energy from Hector I just described. Short period and decent size, because of the vicinity. Below is the position of all the Hawaii buoys, and I also drew the storm in a position that it probably had last night. You can see how very exposed the SW buoy was to that. We're going to receive much less than that, so my up to 15f 10s yesterday's guess was grossly off. I still stick with the arrival prediction of the late afternoon, but probably nothing worth waiting for. Unless you live in a condo in front of Maalaea, in which case, yes check outside your window if something happens. 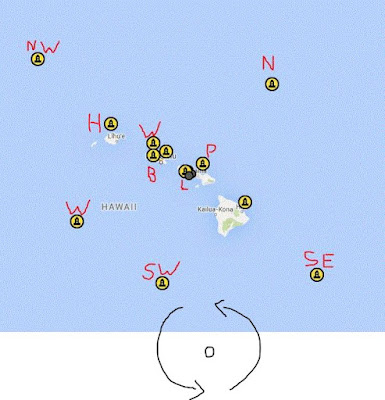 All this discussion shouldn't distract us from the main source of clean waves for the south shore we have on tap for the day, which, once again, is the long period energy from the south swell. The period is down to 13 seconds and that will make the waves down to mostly waist high in my opinion. Not going, not reporting, but Ala Moana is not looking particularly exciting, as it's frequently smaller than what shown below. 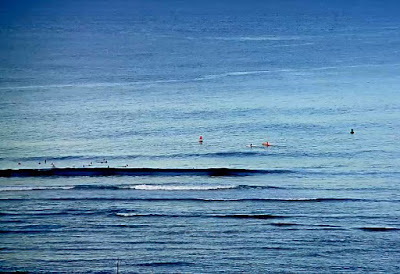 Yesterday afternoon Pauwela went up to an impressive 6.5f 10s (head and a half and above). This energy is coming from the north fetches I've outlined the past four days: you can see the circles north of us in the same collage I used to explain the long period E swell above. Honestly surprised by that, all the models underestimated it. Today it's down a notch (5f 9s, the graph shows it peaked yesterday), but there will still be plenty waves on offer at Hookipa and all along the north shore. Some wind will be on it though, so don't expect anything particularly clean. 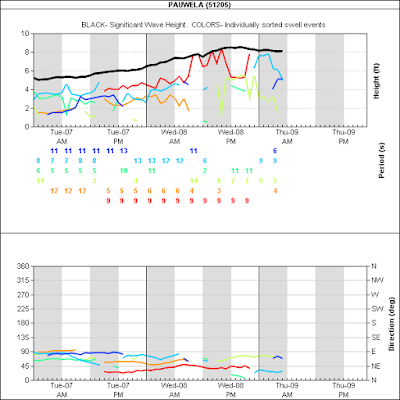 North Pacific has weak scattered fetches all over that won't do much for us. 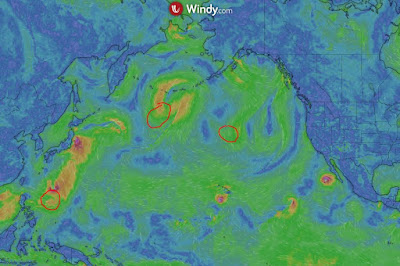 Absolutely nothing oriented towards us in the South Pacific, while the Indian Ocean continues to produce massive storms/fetches. 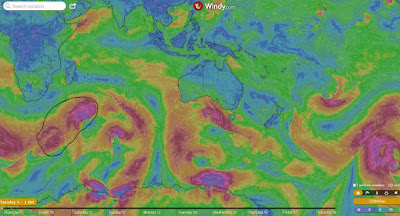 Morning sky at 6am. We got lucky on that one. 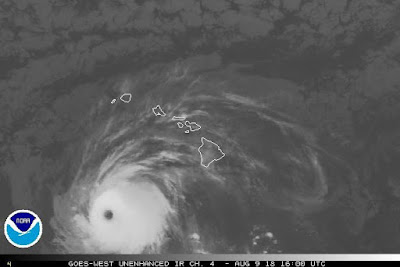