A SUP foiling session and downwind attempt n.12 for me yesterday. As I prophetically predicted, my body started complaining about all that strong paddling on the left and I came out of the water with a brand new pain on top of my right shoulder. Will have to rest it for sure.

The problem is that I'm trying to accelerate from zero to as much as it's needed to catch a slopy chop with just a couple of strokes (otherwise the board turns too much to the right), so I really put 100 percent of my power into them. At the moment I'm using a 83 QB blade, I might have to go smaller. And/or get a proper downwind board so I get more glide and more directional tracking. In the end, I'm trying to do downwinders on a 5.8x28 3/4 and even though the board feels great when flying, it's definitely not ideal for catching the bumps.

I had a phone conversation with Dave Kalama yesterday. He told me that after his first not particularly successful attempts, he wondered if he was just not good enough for this discipline (!), which he compared to golf, seen the apparently endless number of little technical nuances you can learn every time you do it.

I replied:"Dave, thanks for the compassion, but even though I suck, the level of frustration I have out there is zero. I only get to fly a few times per run, but I absolutely love the challenge. And when I do get to fly, I can see how, once I learn, the reward will be proportional to the struggle... so I'm actually happy to struggle!"
That was before the shoulder pain arose.

And we can have a glimpse of what the reward might feel like in this surreal shot of Nathan Van Vuuren during the M2O race last Sunday. Those moments of absolute bliss don't come for free. 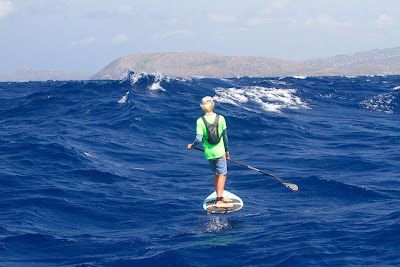 Here's a shot of the top three foil finishers. Notice the massive difference in length between Kai's and Nathan's paddle. Like many other things in SUP downwind foiling, there's contrasting needs everywhere: a short paddle helps the quick/powerful strokes to take off, while a long paddle helps reaching the water when paddling while flying.
Here's another one: a longer board helps catching the bump, a shorter board is easier to pump while flying. Everything that seems to help the catching, seems to hinder the flying and vice versa.... 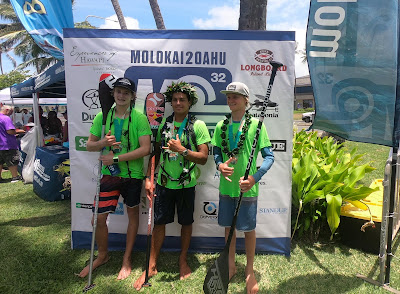 Here's Nathan again and you can see how he benefits from the length of the paddle to reach the water.
I reported an interesting article written by Nathan's dad Ivan at the end of this post. Here's the Facebook page where I took it from, there's more pictures from the race. 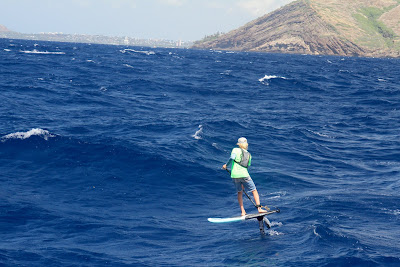 South swell already considerably down in period, but the size came up a bit. Here's a nice set at Ala Moana, but there's plenty flat moments. I will report later in the morning from Lahaina. 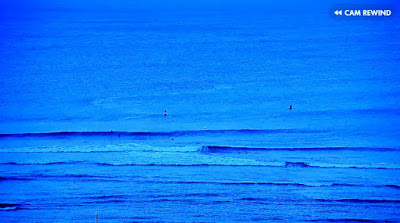 The windswell jumped up as predicted, but the direction is still too east to hit Hookipa directly. Hard to call the size, easy to call the conditions: windy as hell, hence shitty for my standards.
Today Pat Caldwell indicated the arrival of a small NW swell out of the small fetch we observed like three days ago. I don't see anything at the buoys yet (also because ALL the buoys that are NW of us are down: the two NW, Hanalei and Waimea), and even if we do get something later in the day, it won't be much.

South Pacific shows the lovely fetch of the last couple of days still oriented towards us. Gonna make use of the lack of the Meteogram fetch maps and take a larger picture from Windy, so we can check what's going on in the Indian Ocean too. The time for my annual Indo trip is approaching (from mid August on), so I need to check when to buy the tickets. Pretty poor wave generation today down there. Good. 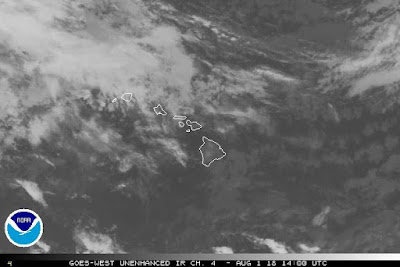 BEHIND THE SCENES STORY..
When 16YO Nathan van Vuuren A.K.A as N8V, (born on Maui now living in Cape Town SA) first received an invite to compete in the M20, World Paddle championships, Kaʻiwi Channel crossing, best known as the "Channel of bones" and the most challenging paddle race in the world + to cross 32mIles / 50km from Molokai - Oahu on a HydroFoil board, little did he know what he was in for.
Having been introduced to this "new" sport by big wave charger James Taylor & Wes Bartho less than a year ago, this young waterman (surfer, longboarder, windsurfer, Stand up paddle boarder) took up the challenge with only 1 month to train + prepare.
Early morning flat water paddle sessions @ the Milnerton Aquatic Club, hours of in + out surf sprints with team manager Michael Oxley during the Cape's winter storms, all in preparation for.... "the last 3 miles of the 32 mile race....."
Ask anyone who has successfully crossed the 32 mile channel and the most common statement will be "China Walls at the end of the race is where everything goes down; insane cross currents, gale wind straight in your face, waves breaking on shallow reefs mixed with fatigue and cramping - save some energy for the end"
Arriving in Hawaii just in time for the MAUI SUP CUP where over 20 of the worlds top foil racers competed together on a 9.5mile downwind race was perfect training as N8V got his 1st taste of world class racing, finishing 3rd behind local boys, Kai Lenny and Kody Kerbox.
1 week to go, and with the trade winds blowing, a perfect time to do up to 50km of downwinders a day with Ethan Koopmans adding local laughs and support.
World championship weekend and time to travel to Molokai with a board, foil and a paddle not knowing what to expect for a young Melkbos surf-rat, totally out of his comfort zone.
Nathan kept saying, "feels like the COOL RUNNINGS movie and we are the Jamaican Bobsled team ready to race at the Olympics"

:) but thanks to key input from endurance athletes Chris Bertish, Jamie Marais, Peter Jelvig Petersen, + 100's of messages coming in from the Stand-Up Paddling South Africa (SUPSA) crew and Joshua Generation Church family in SA + friends around the world, there was at least a sense of a bigger picture and reason for attempting this challenge.
Race day Wake up call 4.30am!
Arriving and seeing the worlds top watermen, athletes and legends ready to take on the 32 mile challenge.
World champion surfer John John Florence ready to paddle his 1st M20, legendary waterman and inspirational, Kai Lenny plus a whole new world class fleet of top foil surfers ready to fly across the channel. Over 20 countries ready to represent and hopefully complete the channel.
1st start 7.30am, Prone paddle boards, 8am SUP and 8.30 foil surfers. Wind slowly picking up, pretty light offshore on the inside - the horn blows and only 3 of the foilers manage to pump up and get going on flat water. Ryan Funk, Geoffrey Spencer and Nate start to fly while the rest of the field paddle harder to get up and going. Speaking with Kai after the race and with a huge grin he was like... " Man I looked and saw the guys pumping and flying away, and started to really worry"...
But Kai is a machine and knows these oceans like the back of his hand, and as much as Nate enjoyed the glory of being in the lead, Kai used all his local knowledge to gain and pass the pack setting a new insane record across the Channel.
But back to young "surfkop N8V", up and flying not exactly sure where he was heading with no land in view and a few muffled shouts from the local Oahu boys on his escort boat + crew directing the way.
EQUIPMENT
What foil set up would be best? was the biggest question- optional small foil board that would handle the bigger drops with a low aspect or hi aspect foil?
SignatureFoils decided to go with a slightly longer 6'4 SUP board, with the 3 mile end in mind- Nate trained & ready to Stand up paddle the last 3 mile flat-water "China Wall" section, where a longer board could be of more advantage, especially with the head winds coming straight at him. Foil= 175 ALBATROSS Hi Aspect foil designed to handle speed and continuous glide with least amount of energy.
Well the equipment choice seemed to pay off - from Molokai to Oahu, 3 hours = 0 wipeouts and only 1 brief touchdown over 30 miles, (not too bad if you've ever tried Downwind foiling)

;)
Standing strong, relaxed and still a smile on the little sunscreen face, passing by the rest of the fleet of Prone, SUPs and different craft, one can see why foil boarding, won't ever replace the traditional crafts, but could quite easily be the future fun of watersport as we know it today. Insane speeds, flying, screams from other escort boats and athletes as N8V flies by, enough energy to keep the adrenaline and little legs pumping.
Flying into 2nd place, with only Kai ahead looking back at an almost empty ocean and notorious China Wall and finish line in front.
Huge swells from every angle, the wind stops and turns straight into a head wind. "Keep it up, keep it up" crew shouting as N8V keeps pumping on flat water into a howling head wind. Rocks and shallow reef starting to pop out the water, the kid keeps it going as far as humanly possible after 30miles of racing. Head down he keeps standing and paddles with last months MAC flat water sessions in mind.
Near the end, the contest director boat comes by and announces that foil racers can lie down and paddle the last stretch.
Nate lies down and then sees a small wave approaching - up on his feet again, howling head wind and with the cheers of the boat crew + crowds in sight, pops back up onto the foil and gives one last glide and paddles all out to to take 2nd place in a world championship event + be the 2nd fastest person ever, on a self propelled craft, to cross the 32 mile Kaʻiwi Channel. 3:17:38
Well done N8V - - BIGGEST thanks to Jesus Christ for the x1 life we have to make it all count & huge thanks to everyone both locally and around the world for the amazing support + opportunity for a young boy to live a dream.