No local photos of the day, this is blog reader Justin enjoying his time at Cloudbreak. 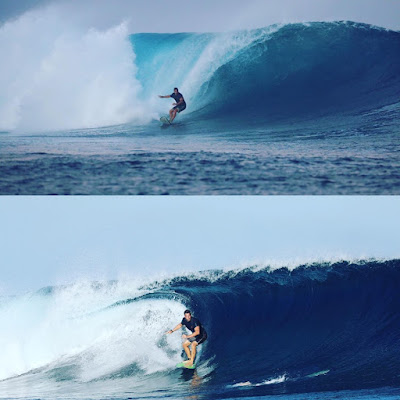 0.8ft @ 22s from 195° (SSW)
Lanai is only showing the long period energy intermittently, but Barbers shows that it is obviously here. This is how Pat Caldwell describes the fetch that generated this swell.
A series of winter-caliber low pressures systems spaced about a day apart tracked east within 60-65S to the S to SE of New Zealand 6/22-28. It is expected to make overlapping events locally keeping the surf heights average or higher through next week. All of the sources aimed highest at the Americas, placing Hawaii just west of the primary swell swath, and increasing the error bars for the local surf estimate due to the near miss of the highest swell. The first event is predicted to be the largest.

The first source intensified rapidly 6/22 S of New Zealand with a wide, long fetch of storm-force winds building seas to 40 feet as it entered the Hawaii swell window within 190-200 degrees east of the New Zealand shadow. The large area of storm-force winds continued over 24 hours. The system slowly weakened 6/23-24 with the head of the fetch of gales to severe gales nosing to near 45S, 170W. The system moved east of the Hawaii swell window as it weakened 6/25.

The start of a long period angular spreading swell means high inconsistency, so I didn't feel like waiting for a proper set (there's not many). Bit of onshore texture this morning in Lahaina. Check it yourself before going. The swell should build all day and it be significantly bigger tomorrow. 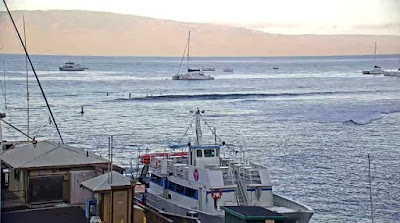 Wind map at noon. I apologize if yesterday I posted a wrong map.

North Pacific only has a windswell fetch.

south Pacific has a strong fetch which is partially oriented directly towards us (red circle) and partially to our east, but close enough for angular spreading (blue circle). 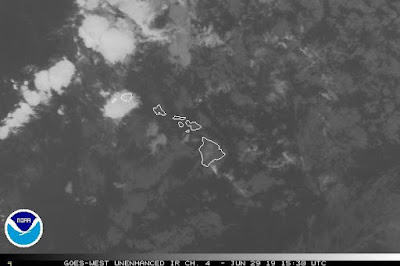