Yesterday was a terrific day of surfing on the south shore. The period was 18s in the morning and 17 in the afternoon and that made most spots close out. But if you knew where to go... oh my goodness. The wind was perfect all morning and my first session was a clear 10.

Afterwards, I went to the GoFoil demo at Thousand Peaks and tried a couple of new wings. There's something special about trying a new foil. The excitement of finding out how it's going to fly is much more intense for me than the one I feel when I try a new surfboard. Not sure what it is, maybe it's just that I haven't tried as many foils as I have tried surfboards. Or maybe it's just that first sip of beer again!

This is a short interview Jason Hall asked me for right after my wing tests. He also shot a video at the meeting at Hi-Tech the day before, in which Alex Aguera introduces the new line of GoFoil wings.

BTW, that weird hook I have on my right hand is a weight lifting tool I found online, and I use it to alleviate the pressure on my trigger fingers when I paddle back out to catch another wave. Pretty effective for that, I'd say. When I paddle for a wave instead, I leave it dangling off the wrist.


I didn't have time to take any photos, as I had to be at work at 2pm, but I promise I'll take some today.

Jimmie Hepp went to Hookipa where the windsurfers seemed to have listened to my advice to go enjoy the small waves (not true: they would have gone anyway!), and this is my pick out of this gallery. 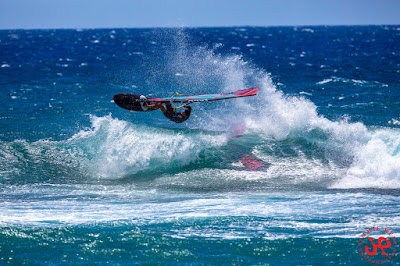 Not sure how to comment on the WNW reading at Barbers, so I won't. But I don't think it matters. What matters are the south swell readings and Lanai shows a beautiful 3ft 15s. Period went down a bit, as it usually does, so today we can expect slightly smaller sizes (but not by much) and a lit less tendency to close out. In other words, it should be another great day of surfing on the south shore.
Check out this head high beauty at the harbor. But also check out the webcam yourself.

Tiny numbers at the local buoy, it seems that the last couple of medium period NW swells just lost a lot of power as they moved down the island chain. Can't see anything at the moment in the cam, I'm going to call another waist to occasional shoulder high day from home.

North Pacific has a very weak NW fetch and a tiny WNW one associated with an interesting new low forming over Japan.

South Pacific doesn't offer anything of relevance for the third day in a row. Expect the second half of this week to go pretty flat. 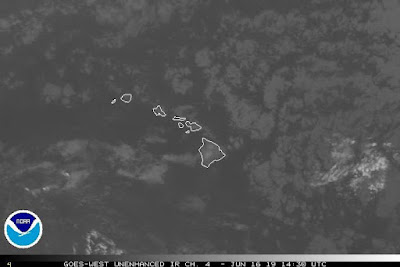