4th post in a row that I start with some kite stuff, don't get used. How's the control this guy has?

0.8ft @ 16s from 195° (SSW)
Background energy down to minimal levels but new long period SSW energy on the rise. Remember the collage of two days ago? Today we're receiving the energy of the fetch that happened in the Tasman Sea on the 30th. This is another image of how that swell looked at Cloudbreak. Same guy who got totally barreled in that video I posted yesterday. This time cruising way on the shoulder with a foil. An absolute waste of a gorgeous wave, imo. Look at the barrel section behind him. Well, he's a lifeguard there, I guess he can choose to do whatever he wants/feels like. 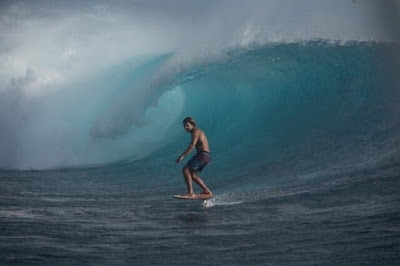 Well, I was lucky enough to catch that same exact wave on the Lahaina webcam and here's how it looks after 4-5 days of extra travel and lots of energy lost while going around islands and reefs on the way. Just kidding of course, but the fact remains that it's very small and the long period sets ridiculously inconsistent. Check the webcam yourself. 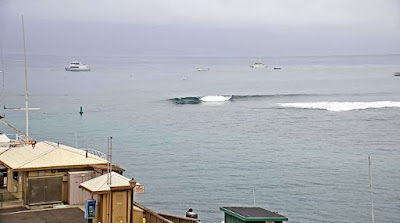 Pure and relatively small windswell at the buoy, Hookipa is going to be close to flat, better size could be found on the east facing shores. Overall, another great day to rest.

NW fetch looks a little better today, but not as strong as it looked on May 31st, the first time I pointed out to you guys. That's yet another proof to never get too excited for things that haven't happened yet. Barely 30 knots and not particularly big, might not be overhead, but I still call for head high sets at Hookipa on Sunday, as it's not too far away.

South Pacific continues to produce fetches in the Tasman Sea. 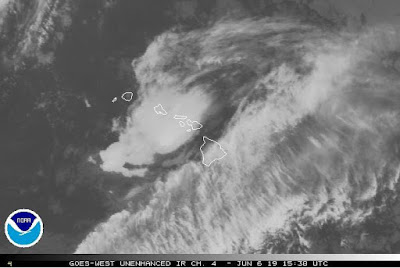 ... and the radar shows big rain just SW of us. Red is scary, you rarely see it.