Kai Lenny recently posted this video about a tow-in contest in Haleiwa. The other day I watched it and then I filmed my reply to it, which I will post tomorrow. Stay tuned.


Friday afternoon at 6pm Gofoil will present its new line of wings at Hi-Tech in Kahului. Very exciting news with new shapes, a lighter wing construction and complete interchangeability (which was the main down side of the Gofoil line). I'll be there for sure. I believe they will also announce the location of the demo day on Saturday. 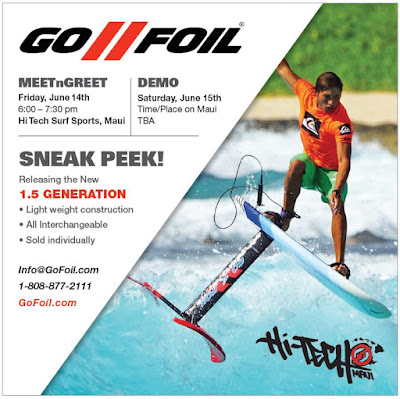 1.1ft @ 11s from 189° (S)
0.5ft @ 20s from 220° (SW)
Lanai
1.1ft @ 14s from 183° (S)
1ft @ 12s from 175° (S)
South swell went down a lot from yesterday, good I only missed a really good day yesterday. Small waves today, but look at that 0.5ft 20s reading at Barbers... imo, that comes from the fetch in the Tasman Sea you can see forming in the map of the 4th I posted in the collage yesterday. It's not the fetch that generated the big swell that will arrive Friday. Or better, it's not the moment in the life of the fetch that generated that one. We have to wait a couple of day for that, as that's what it took the fetch to cross over New Zealand and blow unobstructed waves our way. It'll be interesting though to see what this SW pulse generates. Check the webcam before going.

North shore
Hanalei
3.6ft @ 8s from 342° (NNW)
Waimea
3.6ft @ 9s from 332° (NNW)
Pauwela
3.8ft @ 8s from 77° (ENE)
Only small windswell at Pauwela, but Hanalei and Waimea have short period energy from the NNW that should show in our water too during the day. Nothing major, but enough to keep the flatness away.

North Pacific keeps looking not summery at all and offers a couple of NW fetches. Sunday should be the biggest day according to Surfline with a prediction of 3.2ft 12s.

Only a couple of minor fetches in the South Pacific today, as the strong one SE of New Zealand (black circle) is now oriented too much toward the Americas for us it have some angular spreading energy reach us. 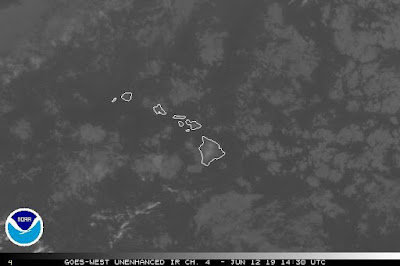 the report i received from the westside for yesterday was the same small surf as monday, but less consistent!
No worries, you/we didn't miss much!
Cheers! R.