Exactly three weeks ago I got slammed on the reef and injured my lower back while surfing. It's been a slow recovery with many ups and dows and after a couple of attempts of going back to surfing (three sessions after one week and three sessions in the last three days), my body (and my massage therapist!) is telling my that I'm not ready yet and I need more rest. OK: I'll rest till Friday (when a new south swell should start filling in) and see how it feels. Why do I tell you that? Expect late calls in the next few mornings.

This is a photo from yesterday on the Lahaina side, but there were bigger/better waves than this. 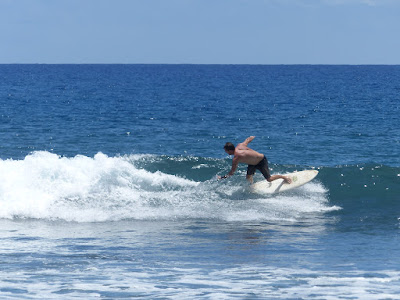 Jimmie Hepp went to take photos of the windsurfers tackling the tiny waves at Hookipa. This is the biggest one I found in this gallery. 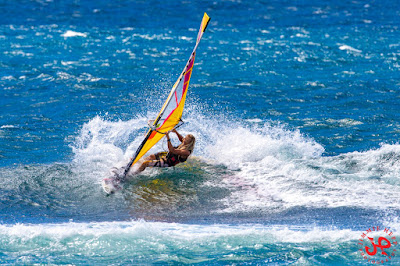 Still great numbers (my favorite size, really) at Lanai, while Barbers register one foot less. To understand why, let's have a detailed look at the collage of the maps of June 1, 2, 3, and 4. This swell started pretty much last Saturday and the energy was coming from the Tasman Sea fetch on the map of the 1st (general rule is about 7 days of travel, but it depends on the period). That day Lanai was reading 1.3ft @ 14s from 203° (SSW).
Then Sunday it was reading 1.8ft @ 14s from 195° (SSW) and Monday 2.2ft @ 13s from 196° (SSW). The progressively bigger numbers are due, imo, to the better direction, as the fetch moved across New Zealand into less sheltered waters.

On the map of the 3rd, I originally circled in blue a fetch of wind oriented to our east and out of which, I was saying, we should get some angular spreading (I added a black arrow to indicate it). And that's the reason why Lanai is bigger than Barbers this morning. A decent explanation of the angular spreading is in this article.

As a result, Lahaina has wonderful waves this morning. That is a head high one. Next one was shoulder high and a guy got barreled on the right (but I didn't catch it). I'm cool, I'll be reading a book at home, but please allow me to express a little feeling of frustration... AAARGHHHH!!!! 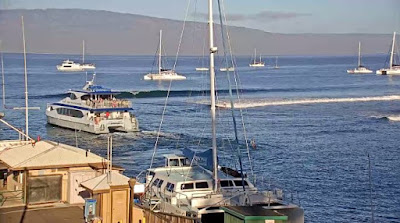 North Pacific has multiple small lows and multiple small highs. That is why we're still getting small bumps on the north shore and why we're not getting the usual very strong trades. Every morning in the last week the wind at my house has been borderline calm. The easterly direction of the trades also brings wonderful sunny weather. I'm loving this Spring.

South Pacific is in full swing, with a strong fetch S of New Zealand. The great circle ray map on the right tells us that only that tail of it is oriented towards (red circle in the map on the left), but it also tell us that the direction of the wind in the main body of it (blue arrow) is not too far off the direction of the rays (red arrow), which led me to circle it in blue and believe that we're going to receive some angular spreading energy out of it. I'm sure the mathematical models calculate that amount with a good approximation, I just like to point out the possibility of it.
Same thing for the weaker (but extremely wide) one SSE of us. Next week should be another good one for the south shore. 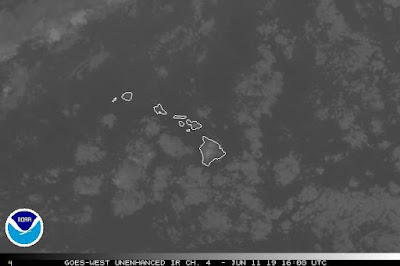