I believe my last SUP foiling downwind attempt played a role in my current rib injury (all that paddling on the front side!), so here's a tip from Dave Kalama on how to paddle on the front side and keep your board from yawing too much. 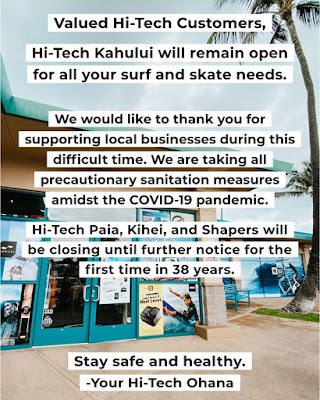 A bit of S/SSW energy at the buoys, the Lahaina webcam does show some small waves. 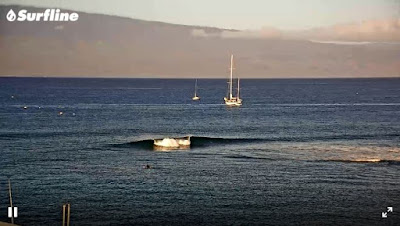 That 15s reading from yesterday was not the new long period WNW swell, this morning instead we have it on the rise at all the buoys. Below is the collage of the NW and Pauwela graphs together with the Surfline forecast. This last one seems to be a bit late again, at least compared to the red dotted line, which is my guess of how the swell will pick up locally, based on the upstream buoy readings.
Either way, that means no signs of the swell until the afternoon, with some possible head high sets only at sunset and only at Hookipa. Meanwhile, almost 4ft 8s from 76 will only provide very small waves, possibly bigger (but still under head high) on eastern exposures.

The reason I wrote "only at Hookipa" is the westerly direction of the swell that will keep the spots towards Kahului most likely flat (at least to start with). Below is the collage of the maps of Mar 16, 17 and 18 that shows the position of the fetch. It started between 290 and 300, the day after was between 300 and 310 and only on the third and last day of wave generation, it was between 315 and 325.
In the post Buoys to Maui travel times and Maui's shadow lines, we are reminded that the shadow line for Hookipa is a 305, the one for Kanaha is 320, while Honolua has it at 335.

Let me also add that the longer the period (and the bigger the size), the more the energy can wrap around land masses, which makes guessing the size of each single spot a very difficult task. The more you observe fetch maps like the ones below and the size at your spot(s) of interest when the swell arrives, the more you'll build a valuable local knowledge which will quickly become more reliable than the spot specific forecast of any "official" wave forecast website.

In this instance, for example, my immediate reaction was "not a good swell for Honolua". Depending on how big it will get, there might be some waves there at one point (probably Sunday), but even so it will be inconsistent, as only the sets from a less westerly direction (in other words, only a percentage of the total energy) will be able to wrap around Molokai.

Northj Pacific has a relative close but small NW fetch (backed up by a bigger angular spreading one) and a new one offshore Japan.

South Pacific continues to produce decent S fetches. Next week should be a summery one on the south shore.