As you know I like to post a picture from the day before, if I have one. I only took very few yesterday, so here's the best one. 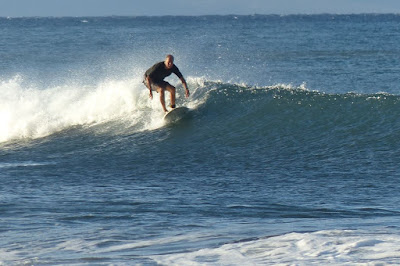 But here's a much more impressive one of Robby Naish at La Perouse taken by Fish Bowl Diaries two days ago (Mar 24). 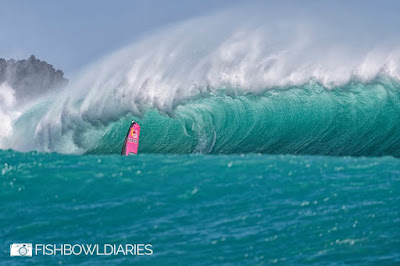 Paul and Sophie must have been shooting from different spots, this is the same wave from another angle. 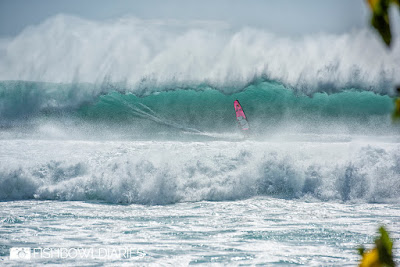 SSW swell down to a couple of feet 14s at the buoys, which is a lot smaller than it was, but still far from flat. Notice the sliver of the 20s energy both buoys are feeling, sign of the start of another long period pulse of energy. Below is the collage of the maps of March 18, 19, 20 and 21. I put a red arrow on the fetch that has made the waves we've had so far and a black on a completely different one that is the one responsible for the new low long period energy.

It should appear immediately clear that this second swell won't be as strong as the first one. The second fetch, in fact, was first heavily blocked by New Zealand and when it then moved east of it and out of its shadow, it was a lot weaker and a little more distant than the first one. Still a fetch nonetheless, so there are still going to be (small) waves on the south shore for another week (there was yet another fetch after those two).

Check the Lahaina webcam for size, condition and consistency, this was a pretty decent size set and I've seen a couple of more head high ones while writing this post (love the split screen). 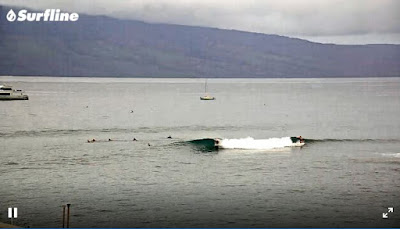 The NW buoys are "overwhelmed" by the strong easterly windswell and don't even report the very low NW energy that the more protected local buoys show. I'm impressed by the sensitivity of Pauwela, as that one is not protected at all (10.4ft 9s from 55!) and yet it still senses it.
Well, that small amount of NW energy won't be much detectable in the water by human observers instead, as the windswell is just too strong. Pretty useless too, seen the strong active wind on it, unless you seek and find a very sheltered spot.

No more good stuff from the south.