With a remarkably good timing, I got myself a non traumatic rib injury, so expect late calls for a while, as I have to stay put. I had saved this photo some time ago, this is Terry Shannon at the Wedge in an incredibly round barrel. 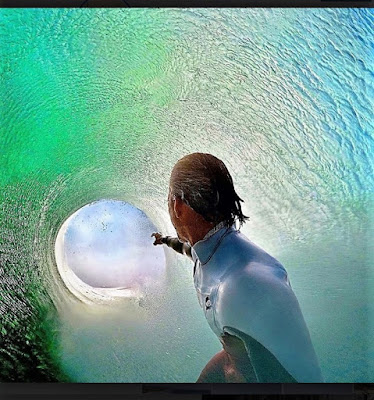 0.7ft @ 12s from 204° (SSW)
Not much else in the water, so the local buoys can sense small southerly energy. The Lahaina webcam, as usual, will tell you much better what's in the water. And indeed, there's some small waves. 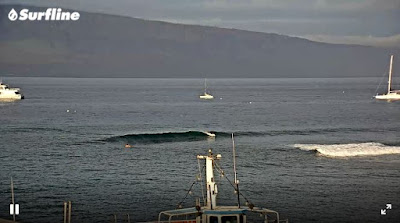 Actually, not that small in this set at the Breakwall. 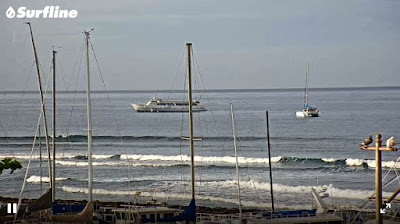 Wonna know where they come from? Below is the collage of the maps of Mar 10, 11 and 12 that show the small fetch just east of New Zealand. 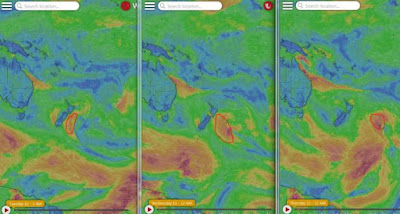 3.2ft @ 11s from 63° (ENE)
Slivers of NNW energy at Waimea and Hanalei, big SE at the NW one (which obviously won't reach us), what counts is what Pauwela is reading: 8ft 8s from 88. That will make for very small waves at Hookipa and much bigger sizes on eastern exposures.

That decent NW fetch in the North Pacific is the one that will provide the next decent size swell predicted by Surfline to peak Saturday at 6ft 15s from 309. Seen the trend of late predictions (and seen this fetch this morning), I'm pretty sure there will be waves already on Friday. Small stuff till then.
I put some small arrows to indicate the low spinning west of the island and causing the rain in Kauai (see below) and the ESE winds locally. When looking at the wind maps, it's always a good idea to look at the wind direction just offshore of Hana (or NE of it). If you do that regularly, soon you'll be able to guess the intensity of the wind on the north shore without even looking at what the model thinks. Today, for example, with that direction it's easy to predict that the wind most likely won't get all the way down to Kanaha. But if it's sunny, that can change too.

Decent S fetch down under, even though part of it is aiming to our west.

Lots of rain in Kauai.