The angular spreading northerly swell ended up dominating the scene yesterday and the waves got pretty big on the north shore, as shown in this photo by Jimmie Hepp from his album of the windsurfing action at Hookipa. 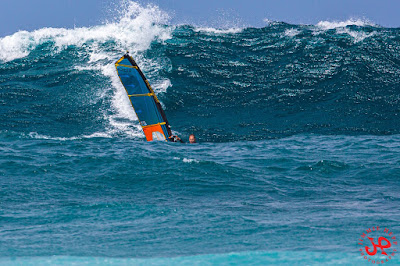 4am significant buoy readings and discussion
South shore
Not much at the buoys, check the Lahaina webcam if interested. Nothing today, but it was waist high yesterday. That might have been all we got from that big Fiji swell. Told you not to lose your sleep over it.

4.1ft @ 13s from 355° (N)
2.1ft @ 4s from 44° (NE)
Northerly energy is bigger in Maui than in Oahu and Kauai, as you would expect from an angular spreading of a swell that is missing us to our east. I realized that the picture I posted yesterday to graphically express this concept might have been misunderstood, so today I added the arrows to indicate in which way the swell is spreading. To make it 100% clear, I even put a B to indicate where the swell is bigger and an S to indicate where it's smaller. 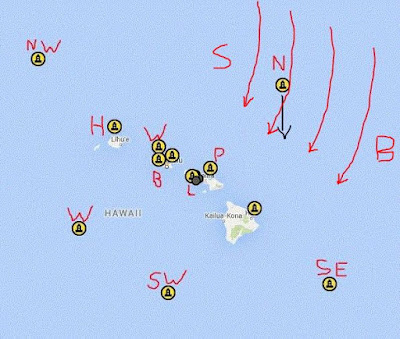 North Pacific has a very weak NNW fetch and a NNE windswell one.

Small and remote SSE fetch in the South Pacific.