Yesterday I wrote "possible head high sets only at sunset and only at Hookipa". Well, I was right about time and location, but the size actually went more than that. 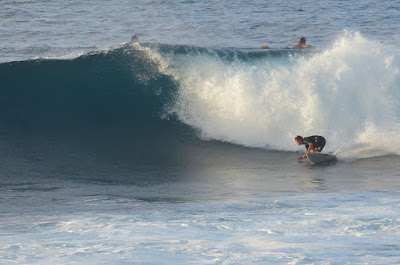 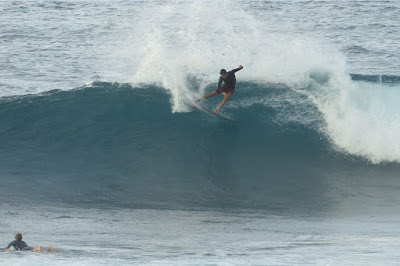 As predicted, the sets were inconsistent, but when they came they were solid. This is the biggest I saw: double overhead The buoy was reading around 2.2ft 20s, which shows the incredible amplification power of 20s period.... I will never forget that 4ft 20s south swell that made triple overhead waves at Dumps and quadruple overhead ones at La Perouse. I almost feel like coming up with a new rule of thumb: at 20s, each foot means a head, but no... it depends too much on the spot. 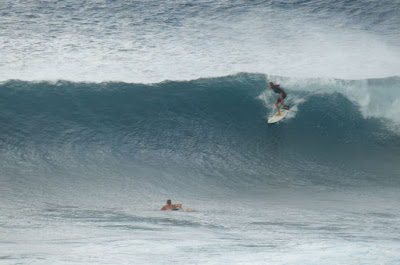 Tiny amount of SW energy at Barbers, check the Lahaina webcam if interested.

3.1ft @ 9s from 68° (ENE)
2.7ft @ 7s from 82° (E)
Below are the graphs of NW and Pauwela, together with yesterday's prediction and the Surfline forecast. This last one ended up being a bit late again (it called for 2.7ft at midnight, while it was 4ft), but this time a bit less than the usual 12 hours. What counts is that the swell did pick up during the night and will continue to do so during today. I believe it might reach around 5-6ft 17s, hard to predict exactly how much energy will be blocked by the upstream islands.

Again, this swell is pretty west (check the direction at the NW buoy!), which means that Hookipa is going to be the biggest spot (other than Jaws which, I think, will have some breakers) with the size decreasing progressively towards Kahului. Consistency will be low, that too decreasing while moving west down the coast. The wind should be calm at Hookipa until around 9am, make the most of it, as we have a week of strong trades ahead.

North Pacific has a small/weak NW fetch and an interesting NE one.

South Pacific's south fetch is getting weaker (still pretty wide though), while there's a new and rare SE one which will be mostly blocled by the Big Island.