SUP foiling downwind attempt number... I forgot, but must be around 16 at least, went down yesterday. I had expectations of betterness because I used a carbon Starboard Hypernut 7.4 with a Gofoil GL210 and Maliko tail (all of which available for rent at Hi-Tech), instead of my usual 5.8 "wave" board, and I thought it was going to be a lot easier to lift off. In the morning, I made sure the footstraps were in the correct position is a short harbor session (back one is a custom home made long one).

The board was definitely less yawy that mine, but it was still extremely hard nonetheless to catch those slopy little bumps. It was one of the hardest attempts actually, as there was too much medium period energy being bent by the outside reefs to a direction parallel to the coast and interfering with the pure wind chop (which is what you want to take off). I got up 4 times, but only to fly 20-30 seconds. Next time, back to Kihei, much easier. But it was great to be alone in the wild ocean out there. 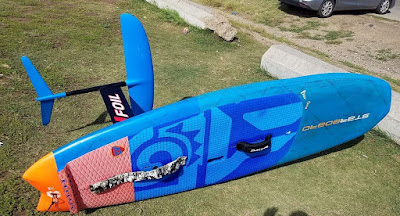 Since we're in foiling mode, this video just came out.

3.1ft @ 5s from 69° (ENE)
Another day of relative short period NE energy and lots of wind. With that size and direction, Hookipa will have blown out overhead waves all over the place. Seek sheltered places if on the north shore.

North Pacific has a small NW fetch and the windswell fetch.

PS. I'm aware the wind meter on my roof is not transmitting anymore, but I'll wait for better weather to try and replace the battery.
Posted by cammar at Saturday, March 07, 2020