The lack of wind in the morning made for good surfing conditions yesterday. 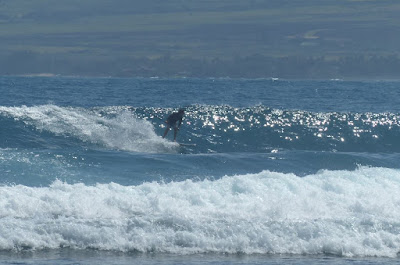 A blog reader had smartly setup a camera on a friend's house to film his session (excellent way of checking out your surfing and correcting your mistakes) and sent me a mini clip of one of my waves. I don't think the bird was particularly impressed. 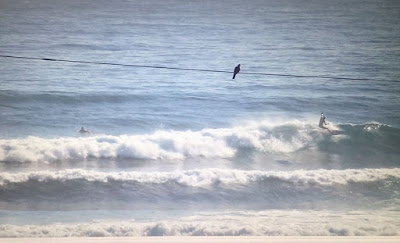 Tiny southerly energy at the buoys, check the Lahaina webcam to see what's there.

Once again the ENE windswell will be the main energy in the water. Hookipa might still be occasionally head high, but I think it will be overall smaller than that. Eastern exposures will have bigger sizes. Enjoy the lack of wind in the morning, before the trades start cranking again Friday/Saturday.

North Pacific has a couple of small NW fetches and a much stronger but oriented to our east one in the Gulf of Alaska. Close enough for angular spreading, says Mr. Caldwell:
A low pressure system in the Gulf of Alaska 3/4 is modelled to track ESE. Combined with the strong high pressure to its west, gales are aimed at targets just east of Hawaii, though close enough for angular spreading. This pattern should hold into 3/6. Moderate period swell of 12-16 seconds is predicted to pick up locally Saturday night from 010-030 degrees. It should peak Sunday night then slowly drop on Monday.
4ft 12s from the N, says Surfline.

I found another link for the satellite picture. This is 5am. Another glorious morning is about to happen. 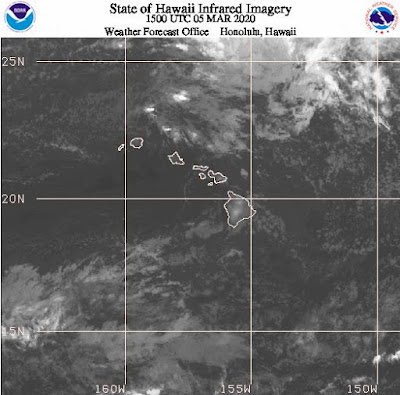