Thanks to blog reader Renew Your Spirit for the donation.
Total rest for me yesterday, I went to Hookipa around 5 and saw the end of a likely excellent windsurf session. This was one of the last sailors coming in, logo high and peeling. 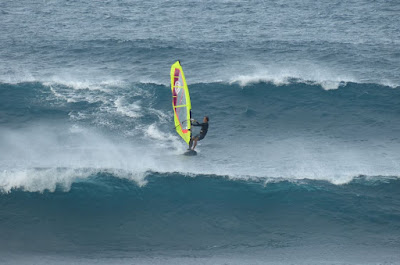 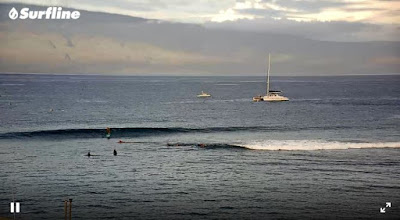 3.3ft @ 12s from 34° (NE)
2.7ft @ 6s from 85° (E)
That 1ft 15s at the NW buoy COULD be the forerunners of the new NW swell, the NE direction being influenced by the strong short period SSE energy in the water up there. No other sign of it on any of the other buoys, so the confident factor is low and can be confirmed only by the readings of the rest of the day. But even if it is, I doubt we will see anything locally. It would only be an indication that there'll be waves already tomorrow morning, but also for that, we can have a confirmation during the day (or tomorrow morning).

Meanwhile, the angular spreading NE swell that graced us yesterday is today down to 3.3ft 12s, so expect smaller sizes than the opening picture at Hookipa (should still be at least head high). With the addition of the shorter period E energy, eastern exposures might have bigger sizes.

Wind map at noon today is not available.

South Pacific has the well positioned S fetch we've observed in the last couple of days and a new Tasman Sea one that is greatly blocked by New Zealand instead.

Keep an eye on the radar (link n.8), looks like 2 days ago when the rain was SW of us and then in the afternoon we got very wet.