My pick of Jimmie Hepp's album of the windsurfing action at Hookipa. 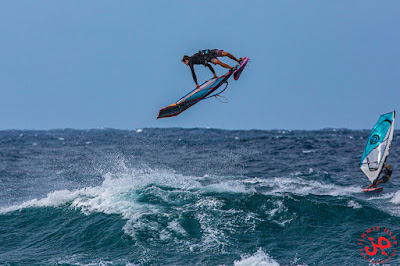 0.8ft @ 11s from 184° (S)
The 16s is the wrap from the NW swell, so there should be very little energy again on the south facing shores. Check the Lahaina webcam if interested.

4.1ft @ 15s from 344° (NNW)
Finally after days of only windswell we have some grounds swells in the water. Let's first talk about the NW one, which during the night built up to 4ft 15s locally. Below is the graphs of NW and Pauwela together with the Surfline forecast, which, as usual, is a bit late and under predicted (black line). Judging from the NW graph, the swell (circled in red) shouldn't get much bigger than it is now but remain steady throughout all day.

Did anyone notice the 9.6ft 13s at the N buoy? Below is the collage of the maps of Mar 3, 4 and 5. On it I put a red arrow on the relatively small fetch that generated the NW swell. The blue arrow on the last map indicates a much larger fetch in the gulf of Alaska, out of which we should start feeling some angular spreading later today. Link n.0 of the GP's meteo websites list in the right column shows the position of the buoys, which I conveniently also report and discuss below.
The black arrow in the last picture shows a different new NW fetch, the related swell being still on the way and predicted to arrive around Wednesday.

The black arrow shows that a swell at the N buoy from around 350 (too many swells in the water to be sure that it's really exactly from that direction) will miss Maui to our east. The red lines I drew indicate the general direction of the angular spreading of the swell from that Gulf of Alaska fetch, and you can expect the size and consistency to increase the more you move to the east, towards the real core of this swell. So how big is this northerly swell going to be in Maui? Impossible to predict exactly (Surfline says around 4ft 12s tonight, light blue line on the graph), but 9.6ft 13s is a promising number. 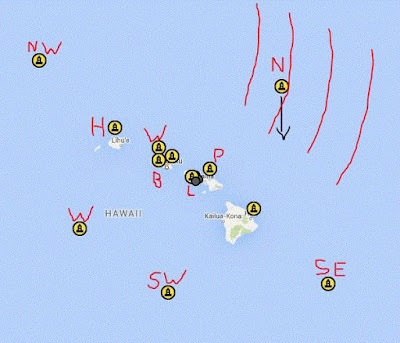 To recap, today we have:
- a new NW swell
- a possible new angular spreading N swell later in the day
- the still elevated (8ft 9s from 46) NE windswell.

Plenty energy to play with, it will be pretty difficult not to find waves on the north shore today. Conditions won't be particularly clean (specially at Hookipa with all these energies in the water), but the trades should be a little less strong than the past couple of days.

North Pacific has a very weak NW fetch and a close-by NNE one.