I didn't take any photos yesterday, this is Annie Reickert gracefully bailing in a wipeout that busted her stick. Photo by Erick Aeder. 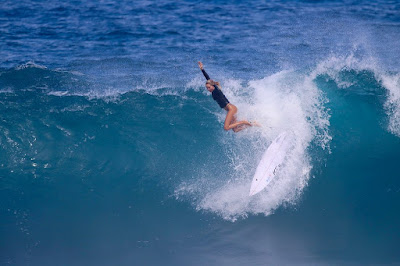 4am significant buoy readings and discussion
South shore
Nothing at the buoys, check the Lahaina webcam if interested. There's not much, but I heard of small waves in Kihei yesterday, although the Kalama cam shows not much over there either.

3.5ft @ 9s from 22° (NNE)
NNW swell coming down and revealing still a bit of energy from the NNE. At that size, Hookipa will be a much more manageable size (gonna guess head to head and a half from home), which, in turns and on a Sunday, means high crowd advisory. Will try to post a beach report later, but no guarantee. Once again, seen the direction, all spots on the north shore should have waves. Small kine but not flat is my guess for Honolua.

North Pacific has a three small/weak fetches scattered across its area.

South shore has a low NE of New Zealand with a tiny fetch, but it's the low that is now by New Caledonia (red arrow) that will move in its place and have a much better fetch in the next few days.