Hookipa yesterday at sunset had some size, but it was tricky to say the least. 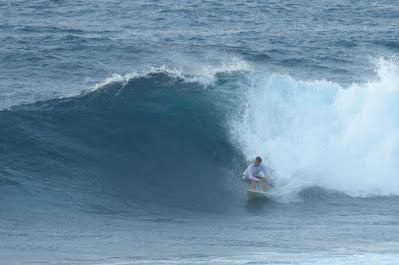 Below is just a small sample of the 167 Jimmy Lewis boards Hi-Tech lately received. I grabbed a few for the rental fleet so that we now have ALL the sizes of the following three lines: Destroyer, Maui Model and HP. You can move up to two days of rentals towards the purchase of a brand new board, so this system offers a great opportunity to our customers who want to try a board before buying it, or they're not sure about the size.

These boards are excellent: light and durable and fun. Over the last two months, the number of Jimmy's in my personal quiver went from 0 to 2. I needed to replace the 8.6 Stewart CMP that I recently broke in half (second time, but this time I'm not going to have it fixed) with a similar size performance longboard, so I got myself a 8.6 HP (like the last board on the right).
I also bought a 6.0 Destroyer (exactly like the blue one on the left) which has proved to be so ridiculously fun that I might have to do a proper review about it.

Long period SW swell continues with almost 2ft 18s at both buoys. There will be some beautiful sets, but the consistency will be low, as for every Tasman Sea swell. Check the Lahaina or Kihei webcams if interested, for size, conditions and consistency.

Maui's west shore doesn't apply to that general statement, because we're shadowed by Molokai. The direction of the 12s energy is good for Honolua, which will likely have waves today (nothing big). The much longer period swell is a bit too west and might only add a few inconsistent sets (if any) at sunset and tomorrow.

Hookipa is much more exposed to both, so my guess for the size is head and a half to double, possibly increasing at sunset and for sure bigger tomorrow. It's going to be windy though, so conditions will not be pretty (for surfing).

Below is Pauwela's graph. The NNW swell is peaking, while the WNW is just barely appearing on the chart. 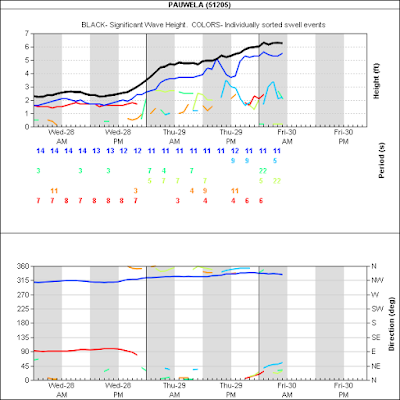