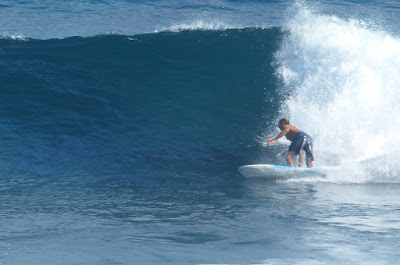 Pat Caldwell just posted this interesting paragraph about the recent long period energy from the Tasman Sea, confirming the unpredictable nature of those swells:
That recent maximum from the Tasman direction was interesting. It peaked on Saturday 4/17 with 18-22 second wave periods. Some nice head high sets at top spots during select active spells. Most often as a southerly event progresses, you get your biggest surf on the second day as the wave periods favor 16-20 seconds. But not in this case. The energy measured at the southern buoys was much less on day 2, with local surf dropping– a one-day wonder. It was a unique source– over 5500 nm away. It was generated well WSW of Tasmania. Seas got near 50 feet from hurricane-force winds. Somehow the extra-long wave periods had the most energy once arriving in Hawaii. I am not sure why.

Below is the collage of the maps of Apr 10 through 13 (already posted on the 16th). The fetch he refers to is shown in the very first picture. Anyway, this is all past stuff, just interesting from an academic point of view.

Not much going on in the water today. Check the Lahaina or Kihei webcams if interested, for size, conditions and consistency.

Only 2.8ft 9s from NNE at Pauwela, even though the spectrum below still shows some NNW energy (not sure why and which one is correct). Based on the readings, home guess for Hookipa is for waves in the waist to chest high range and clean conditions for most of the morning. 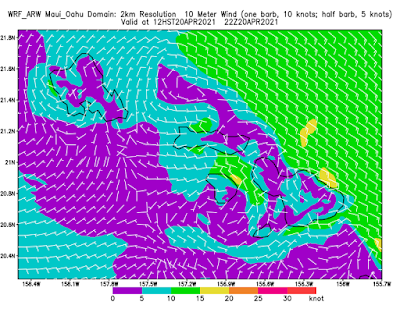