Hookipa yesterday morning had some particularly clean inconsistent westerly sets. There were no other swells in the water and the long flat spells made for extremely calm waters and when the set came it looked like the Lahaina side kind of cleanness. 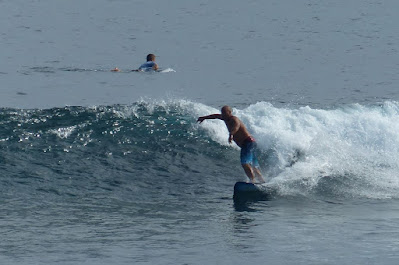 Will Hunt is in Mexico instead and is practicing riding beach break big barrels. 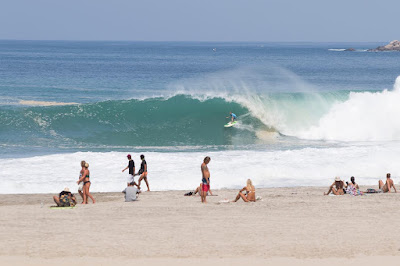 The 13s is still the westerly energy that will be felt more on the Kihei side. The 20s energy instead comes from the Tasman Sea. Below are the maps of April 22 through 27 that show the fetch. The sets arrivals will probably be inconsistent.

Things are about to shake up quite a bit on the north shore that has been sleepy for quite a few days. Here's Pat Caldwell's description of what happened (timing is for Oahu):

A low-pressure system that tracked across the breadth of the N Pacific 4/22-27 is giving us the tale of two swell events.

The second part was generated once the low set up NNW to N of Hawaii 4/25-27. The low center slowed in track and set up a long-lived, long, wide fetch of strong to near gale winds stretching from the Aleutians to about 1200 nm out from Hawaii 4/26-27. The system is sharply weakening 4/28.

NOAA NW buoys show the 10-12 second energy from 335-355 degrees on the rise midday Wednesday 4/28. This event should pick up locally overnight and climb above the May average by dawn on Thursday. The event should hold about the same into Friday morning, then drop to small levels on Saturday from the same direction.

Below are the graphs of Waimea and Pauwela, together with the Surfline forecast. North shore should hence have plenty waves today (home guess for Hookipa is head high plus and building), unfortunately with light NE wind that will bring plenty chop in the lineup. 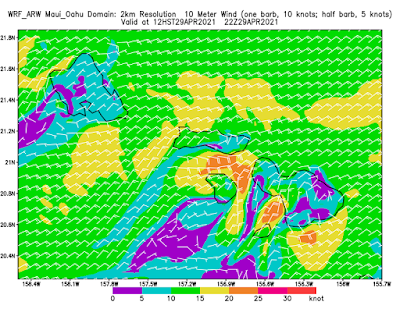