Hookipa yesterday morning. It wasn't a 3 for this guy. 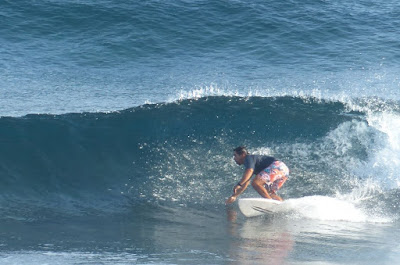 Very small energy at the buoys. Check the Lahaina or Kihei webcams if interested, for size, conditions and consistency. 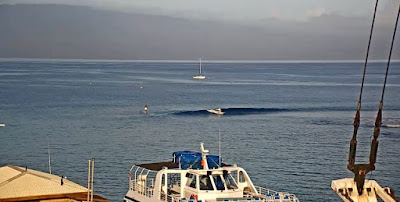 New relatively short period NW swell will be on the rise all day. Here's Pat Caldwell's description of the evolution of the fetch: ASCAT satellite Sunday night 4/18 showed near gales north of 40N west of 165W (~1100 nm away) aimed highest at targets west of Hawaii. Seas were within 10-15 feet. Models show a fetch of strong breezes with a direct aim at Hawaii Monday night into Tuesday morning 4/19-20 nosing within 600 nm.
Both the remote and the nearby fetches should trend the surf up locally Wednesday PM 4/21. Both should peak early Thursday 4/22 from 320-350 degrees of 8-12 seconds (déjà vu from recent events). It should drop Friday.

Below are the maps of April 17 through 20 that will help follow. The fetch is the one indicated by the black arrow. The red arrow indicates a compact storm offshore of Japan that will generate a bit of a west swell next week.

Below are the graphs of NW001 and Pauwela together with the Surfline forecast that seems to be a bit late, as usual.

Based on the 6am Pauwela readings, home guess for Hookipa is for flat spells between the arrival of the NW sets, which could be up chest high, slowly increasing throughout the day. Clean conditions to start with, but the afternoon will see the return of the trades. 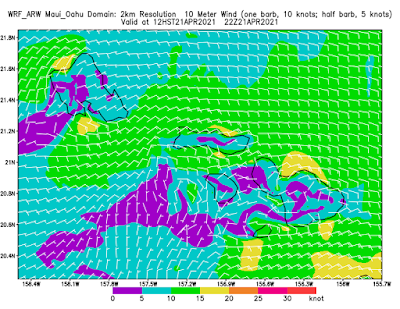