A SUP foiling session for me yesterday. It was at Hookipa and that was a first. Pretty fun, but short rides on the inside and some apprehension to negotiate the shore break. In the morning, the waves got progressively better and conditions magically improved to a 5 when Kai Lenny hit the water. Here's a shot with a beautiful light. 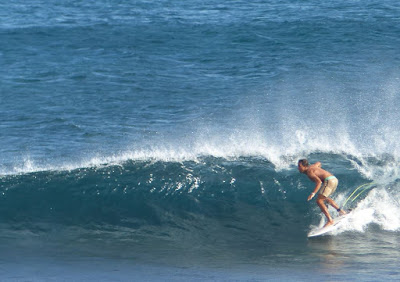 5am significant buoy readings
South shore
No indication of southerly energy at the buoys, the Surfline forecast calls for 0.6 9s, which is pretty much nothing. I wonder how big/small the windswell left by 4 days of kona is, but I have no reports.

1.7ft @ 8s from 322° (NW)
1.1ft @ 11s from 314° (NW)
We went from tiny and clean to tiny and onshore. Don't waste your time going to Hookipa today, unless you're foiling. This week has been pretty horrible from the surfing point of view (mostly for the lack of energy), but the weekend and next week it'll be a completely different story. Below is the long term Surfline table, which is something I'm not supposed to post, as it is subscribers only content.

But I hope that showing it once in a while will show the readers how cool it is to know what's coming 17 days ahead. If you click on the links n.14 and 15 and then on the offshore swells tab, you still get the next three days if you're not a subscriber. Knowing the long term forecast can be useful for planning work vs play time and it's key if you want to take a last minute surf trip based on the forecast (I do that when I go to Indo).

Anyway, four NW swells back to back, the second of which might reach warning levels. As you can see, unfortunately the trades are going to get pretty strong mid next week and the related windswell will become quite elevated. But Honolua will be breaking beautifully.
There are also going to be quite some windsurfing action at Hookipa, as many brands are waiting for the right conditions for their annual photoshoots. 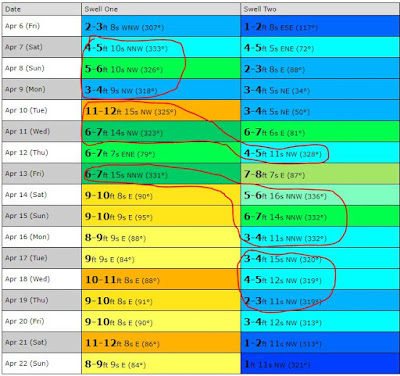 Wind map at noon. Too onshore for decent sailing on the north shore.

North Pacific shows a close by NW fetch (tomorrow's swell) and a remote one (Tuesday's big one).

South Pacific shows a small fetch NE of New Zealand and an extremely remote S one. So remote, that I had to slide the map down and write a letter H to indicate the approximate position of Hawaii. No idea of how much we're going to get from down there, but Surfline has a long period swell starting Mid next Sunday and lasting pretty much all week, reaching about 2 feet. 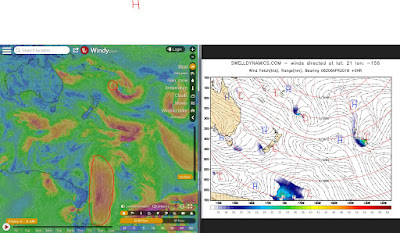 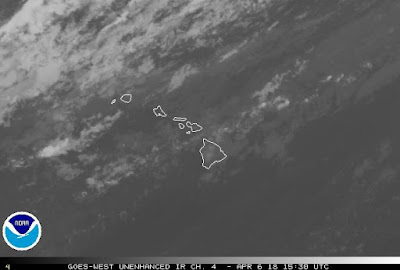