A longboard and a prone foiling session for me yesterday.
This photo shows the size of the set waves on the south shore. 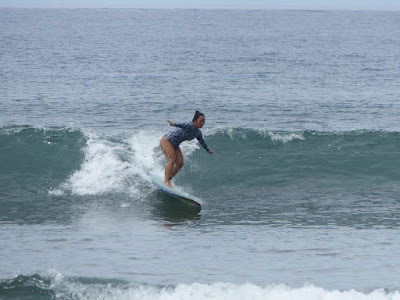 And if you feel that need for a more dynamic action shot, how's this one from GoFoil of Zane Schweitzer and Austin Kalama doing aerials (the former one strapless) on their SUP foiling boards using the wake of a boat? 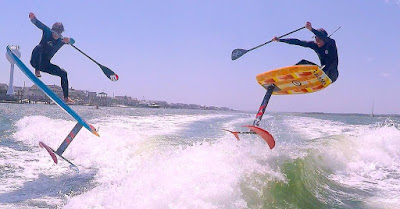 3am significant buoy readings
South shore
No indication of southerly energy at the buoys, the Surfline forecast calls for 1.8f 11s.

3.4ft @ 6s from 62° (ENE)
2.9ft @ 12s from 334° (NNW)
2.1ft @ 10s from 354° (N)
Below is the graph of the two reported buoys plus the Surfline forecast. The current small NW swell seems to have peaked (light blue line at Hanalei and red becoming orange at Pauwela) and today it should be slowly tapering down in size, as predicted by the forecast (purple line with the red arrow).

Tomorrow a new pulse should arrive (green line with black arrow) and reach almost 6f 14s at sunset. From what I remember from the unimpressive fetches of the past few days, that seems a bit optimistic to me, but it is going to be bigger than the last two ones (Friday and yesterday/today). In the end, size won't matter much because, as it's been the case for the last 2 weeks, the north shore will be windy and blown out.

North Pacific only shows a small fetch in the NW corner.

South Pacific's main fetch is the very tail of a stronger one that now is aiming at Americas, but I think we'll get some angular spreading of it. Plus it was much better oriented yesterday. 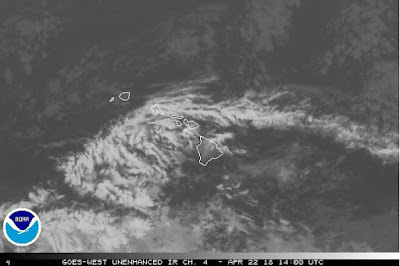