A longboard session for me yesterday.
This is the colorful sunset in a photo by Jimmie Hepp. 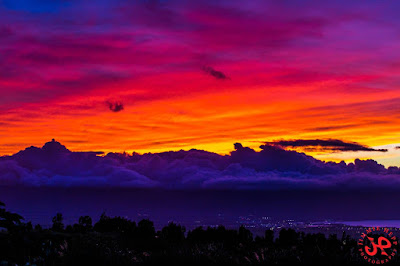 That's the only southerly energy reading I could spot at the outer buoys (always a challenge to interpret the rarely reliable directions) and I like it because it signals a new low long period swell. The surfline forecast calls for 1.8f 11s (old swell) plus 0.7f 15s (new swell).

Pat Caldwell wrote: A severe gale just north of Antarctica to the SE of New Zealand 4/12-14 has potential to bring in a low, long-period swell for the weekend of 4/21-22 locally from 180-190 degrees. Heights should remain at background levels.

And these are the maps/fetches he refers to (April 12, 13 and 14). Btw, when he says background level, for Maui that's knee high.

2.7ft @ 13s from 328° (NW)
Very little to be excited about on the north shore, as the predicted weekend swell is slower and smaller than modelled by the Wave Watch III. It feels a bit less windy than usual at my house this morning though, so stay tuned for an Hookipa beach report before 7am.

North Pacific only shows a windswell fetch as the one north of us is now only aiming at the mainland.

Much better situation in the South Pacific as yesterday's fetch moved east a bit and it's less blocked by New Zealand. 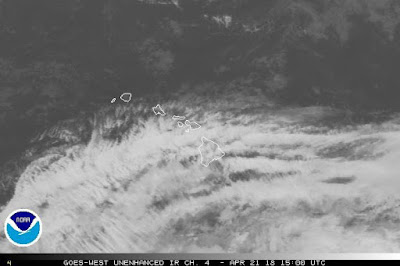