Shortboard session for me yesterday. Dave Kalama (below) was SUP foiling at the harbor instead. That would have been my first choice, but I have to refrain from hand gripping disciplines as I need to give my worsening trigger finger condition a chance to heal. No SUP, SUP foiling, windsurf or windfoil sessions for me for a while. 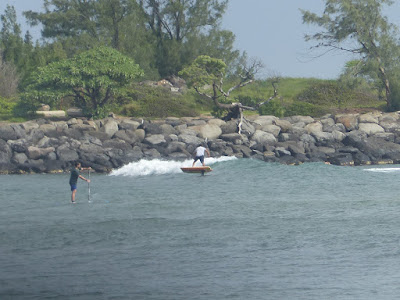 Back to the basics of surfing then, or maybe I can throw in some surf foiling sessions too, inspired by this video of Kai Lenny and Ian Gentil. I quickly discarded surf foiling when I first tried it a few months ago, as the paddle back out is painfully slow with the foil dragging underneath the board and I can catch twice as many waves on a SUP foil. But these guys don't even paddle back out, they pump back out!


Yesterday wasn't exactly a cracking wave sailing day (maybe today it will be), but the very top guys did sail Hookipa. This is Browsinho in a bottom turn that shows ridiculous amounts of speed and control. Photo by Jimmie Hepp from this gallery. 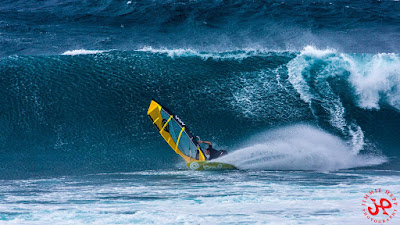 3am significant buoy readings
South shore
No indication of southerly energy at the buoys, the Surfline forecast calls for 1.3f 12s and 0.5f 18s.

4.2ft @ 8s from 33° (NE)
3.6ft @ 7s from 56° (ENE)
NW swell has peaked at the buoys as the collage of the graphs of the two reported buoys plus the Surfline forecast shows. Almost 8f 12s is still a significant size, so plenty energy still on tap for the day, even though it will be declining all day (red line on the forecast). The wind will be easterly and strong. Tomorrow afternoon a new smaller than yesterday swell will arrive and Saturday yet another big NW swell will arrive out of the fetch indicated in the fetches map below. Pretty active week on the north shore, as we anticipated already a few days ago. 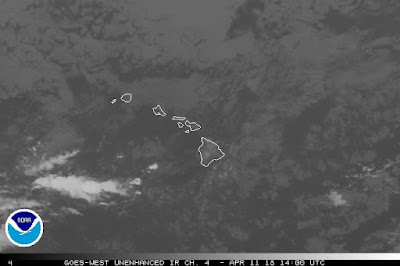