Thanks a lot to blog reader Alex for the donation.

A SUP foiling (9 in the fun scale) and a shortboard session for me yesterday. Here's some picture of Hookipa at sunset, you can see in the background the texture left by the light onshore wind that pretty much blew all day. 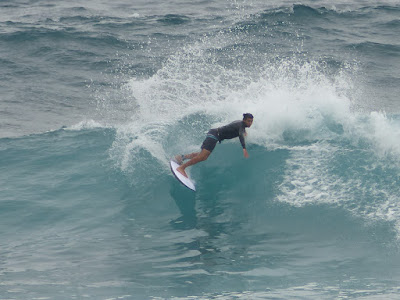 But there were some clean faces too. 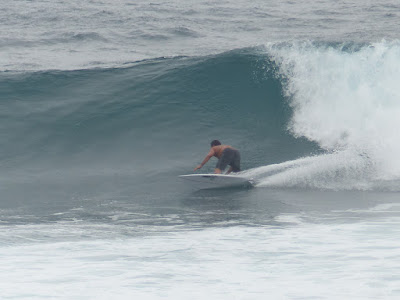 4am significant buoy readings
South shore
No indication of southerly energy at the buoys, the Surfline forecast calls for 1.2f 14s. Yesterday it was still knee to waist, today could be a tad smaller before a new pulse picks up tomorrow.

4.6ft @ 13s from 329° (NW)
3.8ft @ 7s from 349° (NNW)
2.4ft @ 6s from 337° (NNW)
Pauwela
6.3ft @ 13s from 322° (NW)
1.2ft @ 8s from 69° (ENE)
Interesting readings at the buoys that will give me the opportunity for a bit analysis/teaching.
First, have a look at how many periods (mostly short) are hitting Hanalei. That's because the head of the fetch is very close to it and all the periods are still together and overlapping (the buoy is probably in the midst of the active wind). With a more remote fetch, since they travel at different speed, the longer periods would have more time to separate themselves from the shorter ones and arrive first to the break. As a result, the waves will be a lot cleaner (provided there's no other factors like wind and other swells).

Pauwela has not been hit by that raw energy just yet, so it "just" show a solid 6.3f 13s from 322 from yesterday's swell. Below are the graphs of the two reported buoys, let's dig into them.
I numbered the phases the swell had at both buoys yesterday. Based on that, we can say that it peaked in Maui over the night and we can expect a gradual decrease throughout all day today (red dotted line).
I also pointed out that the black line is the Significant Wave Height (SWH), which in Hanalei is starting to ramp up, due to the rough and stormy conditions. That will happen in Maui too, probably towards the end of the day. To understand the importance of knowing the open ocean swell sizes instead of the SWH, please read these article 1 and 2 on Surfline. And if you're not familiar with what is the period of a swell, this article 3 should clarify it.

So how big are the waves going to be today after all that? I can't tell you that, because it depends on the break you go! Plus, what counts the most IMO, is the wind conditions, which we talk about next. 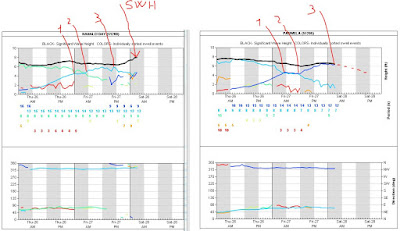 Wind map at noon shows the worse possible wind for the north: NW. No escape from that one and it should blow all day, as you can see from the other maps of the model linked at link n. -2.

North Pacific shows the fetch associated with the close by low. Most of the energy will miss out to the west (red arrow), but we'll still get plenty tomorrow.

South Pacific shows a couple of fetches after a couple of days with no wave generation for us. 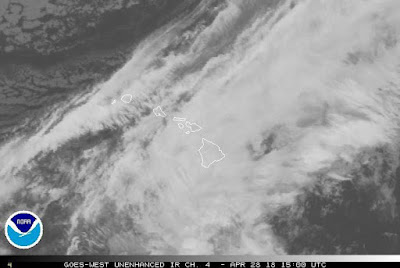